Getting back and giving back 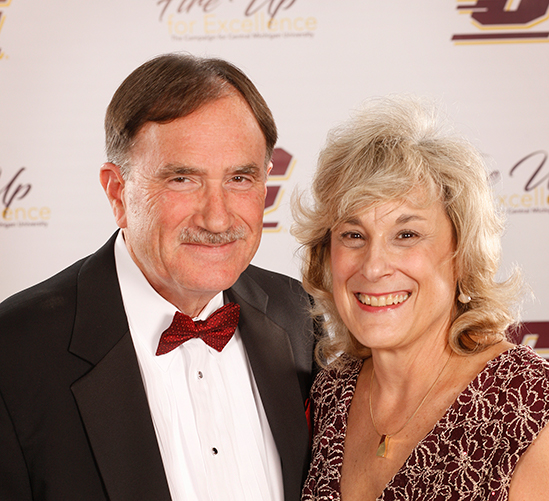 One raised hand in a volunteer meeting can lead to a lifetime of service. One well-educated, mission-driven student can inspire positive change throughout a community.

Those powerful ripple effects of commitment and caring are hallmarks of Central Michigan University's culture, and they've inspired one alumni couple to make gifts totaling more than $500,000 during the university's Fire Up for Excellence campaign.

Mike Murray, a 1975 graduate of the business administration program, and Pam Murray, who earned a bachelor's degree in home economics in 1977 and a master's degree in management and supervision in 1983, have been coming back to campus to volunteer for decades.

Now, they've made a planned gift that will support football and the Chippewa Champions Alumni Center and establish endowed awards in the colleges of medicine and business administration.

Bob Martin, vice president of advancement at CMU, said the programs the Murrays have chosen to support are critical areas for student success and alumni engagement. "CMU Chippewas will feel the impact of their giving for generations to come."

Mike said there was very little business alumni involvement during his time as a CMU student. His cohort was among the first large classes to graduate, and there simply weren't many alumni who could return to campus.

As a result, Mike didn't have much connection with professionals in his chosen field — he was hungry for a mentor who never materialized.

When he returned to CMU years later as a campus recruiter, he saw a chance to satisfy that same hunger for guidance in the students he interviewed.

"It really hit home for me that I could be the role model I never had in school," he said.

“Working with those students, you could really see the transformative power of education.” — Mike Murray

As a student, Pam felt she had been extremely involved on campus. She worked in residence halls and the University Center and sold concessions at athletic events.

Yet as an alum, she realized how much she'd missed: She never attended a student professional organization meeting or tried anything too far outside her comfort zone.

"It's what drives me now. I want to make sure current students know about all of the opportunities open to them, whether it's internships, Study Abroad, student professional organizations or volunteering."

She volunteered for the CMU alumni chapter in Detroit, developed her own professional and social network, and began connecting with students.

One good turn deserves another

Over the years, the Murrays each held a number of roles on CMU volunteer boards.

The Murrays have mentored dozens of students through the College of Business Administration's Dialogue Days. They've stayed in touch with many of them, following their careers over time, and continuing to offer advice and guidance.

"When I tell my story, they are so eager to learn from me. They want to know what I do and absorb what I have to share," Pam said.

The most efficient way to change the world

The Murrays saw how their education had equipped them to solve problems and make a difference.

"Many of the problems we face today are driven by a lack of knowledge or understanding. If our gift enables a student to achieve a level of education that, in turn, allows them to go out and make positive changes in the community, that's a very effective way to address a broad range of issues," Mike said.

The couple hopes their giving will inspire others to share their own time, talent and treasure to increase support for CMU.

"We see ourselves reflected in the students. We could see how much they wanted to achieve and accomplish and remembered feeling those same things," Mike said. "Working with those students, you could really see the transformative power of education."