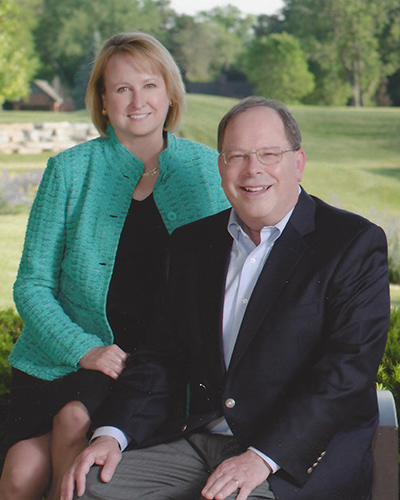 When Sarah Rowley Opperman, ’81, and her husband, Daniel S. Opperman, were deciding how best to invest a donation to Central Michigan University, they had one driving priority: It had to emphasize CMU’s long-standing focus on success for every student.

One result is a $500,000 contribution to expand CMU’s nationally recognized leadership experiences. These not only help students build leadership skills, they expand a deep sense of purpose that positively influences their professional and personal lives, as well.

Another $500,000 will benefit Central’s Charles V. Park Library, which serves students on and off campus and is continually evolving as a center for individual and small group learning.

“Sarah and Dan understand the transformation that happens when CMU students experience the power they have to support each other, their communities and others around the world,” President George E. Ross said. “They know — and have demonstrated — that leadership is about using your talents, your relationships and your heart to create good.”

“We hope students leave CMU understanding that leadership isn’t a title. It’s a decision, each day and throughout your life, about how you live, about the impact you make and about the stamp you put on the world.” — Sarah Opperman

The Oppermans’ $1 million gift is one of several made so far during CMU’s 125th anniversary year. Ross reported during his State of the University address on Sept. 13 that CMU has received more million-dollar gifts this year than throughout its history, combined.

Sarah Opperman in 2016 concluded an eight-year term on CMU’s Board of Trustees, including two as chair. She retired from The Dow Chemical Co. as vice president of global government affairs and public policy and today serves as an outside director at Isabella Bank Corp. and is an active volunteer. Daniel Opperman has been a U.S. bankruptcy judge for the Eastern District of Michigan since 2006.

“As a trustee, I was impressed with the leadership CMU students demonstrate as a result of their talent, hard work and commitment,” Sarah Opperman said. “We hope to expand that part of their education and experience. We hope students leave CMU understanding that leadership isn’t a title. It’s a decision, each day and throughout your life, about how you live, about the impact you make and about the stamp you put on the world.

“CMU believed in me when I was a student, both supporting and challenging me to succeed. That’s the culture of CMU. Faculty and staff are focused on student success, including experiences and a foundation in leadership.”

Dan Gaken, director of the Sarah R. Opperman Leadership Institute, said the donation will ensure every CMU student learns the skills and acquires the mindset to be a leader.

“Central has set itself apart through its five-day Leadership Safari orientation for new students, its leadership scholarships, leadership camps and leadership minor,” Gaken said. “Thanks to the Oppermans, we will expand those experiences, further cementing CMU’s reputation as the premier leadership university in the state and country.”

“Sarah and Dan know the boundless knowledge that lives in our library, including through online databases and resources,” Luzius said. “Their incredible gift shows they understand the library is a timeless place for CMU students in Mount Pleasant and around the world to think, explore, study, collaborate and learn.”

Central’s Park Library is well known for its four-story curved wall of windows beckoning visitors at night when illuminated and its equivalent of 33 miles of moving bookshelves installed during a massive renovation completed in 2002.

The library is undergoing another series of improvements as some books and periodicals move online, making room for highly coveted student collaboration space. This fall, at the request of students, the library's Extended Hours Study Room went to a 24-hour schedule four days a week.

“Excellent library resources remain essential to the educational process, regardless of where students study,” Opperman said.  “We’re impressed with the continued innovation of the library, again driven by a focus on student success, to deliver what this generation of students needs.”

“Sarah and Dan Opperman came forward with a gift they first considered aspirational,” said Robert K. Martin, vice president for advancement. “As they thought about the reality such a gift could mean to students and talked with their two sons, they knew giving back at this level was right for their family. They’re both remarkable leaders, with a vision and generosity that embodies what it means when we say, ‘Fire Up Chips!’”