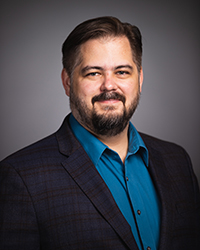 Zachary Klukkert is an Assistant Professor of Anatomy in the Foundational Sciences department at the CMU College of Medicine. Here, he teaches anatomy content throughout the integrated curriculum during the first two years of medical students' training. Dr. Klukkert’s research explores the anatomical variation of primate jaws and teeth in a comparative and evolutionary context. This work involves the analyses of 3D shape and computer-aided simulations on CT-scanned models of primate skulls to identify important functional traits associated with mechanical challenges, i.e., during feeding, which then help to understand the ecological roles of extinct species from fossils. Dr. Klukkert’s paleontological fieldwork is concentrated inside the flooded caves of the Dominican Republic and Madagascar, where he and his team have collected the skeletal remains of recently-extinct primates and other fauna. Published works include analyses of functional dental morphology and descriptions of newly-discovered fossils, the most recent of which explains how the patterns of faunal representation in SW Madagascar though times of drought underscores the human effect on their ultimate disappearance, i.e., human activities, not climatic changes, led to the extinction of large fauna in Madagascar. Dr. Klukkert's work has been covered by Forbes Science and Outside Magazine, and he appeared in the PBS/Smithsonian documentary “When Whales Walked.” Dr. Klukkert is committed to supporting professional and public science communities through service and outreach. He currently serves as a member of the Diversity, Equity and Inclusion committee for the American Association for Anatomy and has been a guest-speaker on topics including anatomy, evolution and exploration for university colloquia, hobby club conferences, and primary school classrooms and families around the world.