If all you know of disability in American history is FDR's polio and Helen Keller's deaf-blindness, there's a lot you can learn from Central Michigan University counseling and special education faculty member JoDell Heroux. 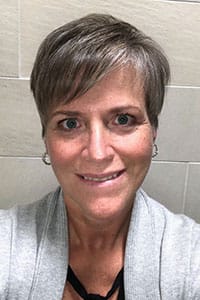 Heroux, who holds an interdisciplinary certificate in disability and diversity studies, has created a course called History of Disability in the United States, SPE 210. It could be a first step toward something unique in Michigan.

Her department is working on a proposal to offer a disability studies certificate that could include on-campus and online options in the near future.

"Few, if any, universities in Michigan currently offer this type of disability-focused certificate program," she said.

In a way, that's not surprising, Heroux said. At some point, practically everyone will experience disability — their own or someone else's — but discussing it is often considered taboo.

"Anyone, no matter what field they're in, will encounter people with disabilities." — JoDell Heroux, faculty member

Heroux's course explores how history has shaped negative understandings of disability — for example, how the eugenics movement aimed to eradicate disability in the 19th and 20th centuries rather than understand or embrace it. Proponents tried to bar "undesirable" immigrants and keep people with disabilities from having children.

"What would happen if people with disability weren't in our society?" Heroux asks as part of her course. "It's said that disability is the largest minority group that anyone can join at any time."

The 2018-19 academic year was the first for Heroux's course, which is writing intensive and part of the University Program. She taught 16 students in the fall and 30 in the spring. The course is scheduled for fall 2019, too.

"The thing I liked most is that my students were from across multiple disciplines," she said. "They are surprised how disability plays into their disciplines."

But it makes sense. Heroux said while everyone understands the need for special education, "disability doesn't disappear once the student leaves the classroom. Anyone, no matter what field they're in, will encounter people with disabilities."

She told of an interior design student who came to realize not everyone prefers natural light — it may pose an issue for people with visual impairments.

Kylee Keller, a senior from White Lake, Michigan, majoring in communication sciences and disorders with a minor in American Sign Language, took Heroux's course in the spring semester.

"I enjoyed learning about all of the improvements that we have made with the inclusion of people with disabilities," she said, "but we still have a long way to go."

Among other projects, History of Disability students write about a conversation with a person who has a disability.

One student learned an unexpected lesson about making assumptions when a person with deafness declined to be interviewed because she doesn't consider deafness a disability.

"Several of them interviewed someone they thought they were really close to," Heroux said, but they soon realized they'd never talked with the person about disability — and that doing so was OK, not taboo.

The experience leaves students wanting more, Heroux said, and she's working to meet the demand. A new Disability in Society course will take a deeper look at contemporary issues, and more courses could come later. She also plans to offer History of Disability as an online course.

Many students tell Heroux the course has unveiled their own negative stereotypes and preconceptions. To Heroux, it's gratifying to see them reach that awareness.

"I don't tell them what to think," she said. "I offer them competing perspectives."