The Central Michigan University community has more than doubled its giving to United Way of Gratiot and Isabella Counties.

Driving the increase was an $81,421 donation from the annual Greek Week fundraiser. The average CMU employee gift to United Way also rose 8%, from $182 to $197. 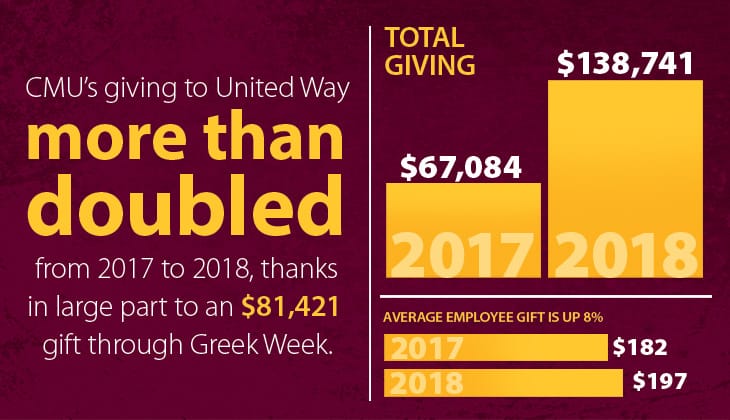 "Greek Week is a longstanding tradition at CMU," said Molly Schuneman, CMU assistant director of fraternity and sorority life. "They have recently recognized the power of rallying behind a cause and have become very passionate about raising funds.

"They have pushed themselves and for the past three years have been raising well over $80,000," she said.

United Way isn't always the recipient of those funds, but Annie Sanders, president and CEO of United Way of Gratiot and Isabella Counties, said the agency will work with Greek Week again in 2020.

"We are really excited about this partnership and working with CMU Greeks as they work to make such a significant impact on the community," Sanders said.

Each year, area nonprofits apply to be a beneficiary of Greek Week. An elected committee selects one or more recipients. This year, Greek Week designated its United Way gift to Parents United to Stop Hazing and the Isabella County Restoration House shelter.

"The students chose PUSH because they want to help support families that have been affected by hazing, and they want to help fund efforts to help educate people and change state and federal legislation regarding hazing," Schuneman said. "They chose ICRH because the organization does important work for our local community."