Central Michigan University’s new physics doctoral program is already showing its star power as one of its first graduates has landed a postdoctoral position at the prestigious Los Alamos National Laboratory in New Mexico. 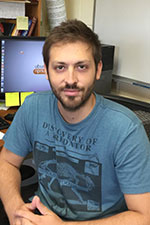 Panagiotis Gastis of Greece, who focused on nuclear astrophysics, recently began a three-year stint at the lab, which is universally known for its top-level research and being the birthplace of the atomic bomb.

The path to success

“He had to work hard to hone his critical thinking, learn to work independently and learn from other experts in the field,” Perdikakis said. “It is important to not only work hard, but to be able to work well with others to gain the experience and connections that one needs.”

Both agree that those skills are what opened doors for Gastis.

“One of the most important things to do, no matter where you are or what your major, is to be connected with the people who are doing the thing that you want to do.” — Panagiotis Gastis, physics graduate

Being a graduate research student at CMU gave him the opportunities to become a part of the nuclear physics community by participating in many international conferences and workshops.

"Through networking, I was able to meet many researchers around the country and do research in large and prestigious labs," Gastis said.

Advice to all students

“One of the most important things to do, no matter where you are or what your major, is to connect with the people who are doing the thing that you want to do,” Gastis said.

“Central gave me many opportunities to learn new things and meet the top professors who helped guide me to be where I am.”