Jennifer DeHaemers will focus on attracting and keeping students

Central Michigan University is sharpening its focus on enrollment with the selection of its first vice president for student recruitment and retention. 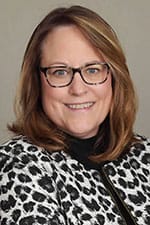 DeHaemers comes to CMU from Southern Illinois University, where she has been associate provost for enrollment management since 2018. In that role, she led an increase in freshman-to-sophomore retention and an increase in undergraduate applications and admissions for freshman and transfer students for fall 2020 — the university's first such increase in many years.

"In more than two decades meeting the challenges of university admissions and enrollment, Jennifer DeHaemers has proven herself a collaborative leader with vision, skill and a track record of accomplishment," Davies said. "I look forward to working with her to lead our university in attracting students and ensuring their success."

DeHaemers will oversee major aspects of student recruitment and retention including Admissions, Scholarships and Financial Aid, the Registrar's Office, the Office of Student Success, and the Career Development Center.

"I am excited to join President Davies' team and work with colleagues at Central Michigan University to improve the overall enrollment and retention of students," DeHaemers said. "There are many outstanding programs and initiatives to positively influence the student experience.

"My goal in this new role will be to provide leadership to the campus to make an even larger impact on enrollment."

He announced the new vice presidency and other organizational changes in August to address strategic objectives in enrollment, marketing and branding. A search began in October with a 12-member committee chaired by Tony Voisin, interim vice president for enrollment and student services, and assisted by search firm Greenwood/Asher & Associates.