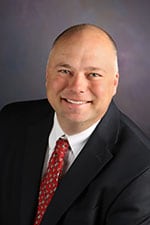 Since 2019, Weindorf has been associate vice president in the Office of Research and Innovation and BL Allen endowed chair of pedology (soil science) at Texas Tech, where he received his bachelor's, master's and doctoral degrees in soil science and soil management.

"Dr. Weindorf is an accomplished professor and published researcher in soil sciences and crop production management, in addition to being involved in many professional academic activities, community STEM education and other endeavors," Schutten said. "We are excited to welcome Dr. Weindorf to CMU."

Weindorf has held leadership research roles at Texas Tech since 2014, when he was named associate dean for research in the College of Agricultural Sciences & Natural Resources. He also is associate director of Texas Tech's STEM Center for Outreach, Research and Education.

"I am excited to be able to take a leadership role in helping to guide and grow CMU's already strong and accomplished research endeavors, from incoming freshmen on up," he said.

Weindorf brings a global perspective to his position:

Weindorf will succeed the current vice president of research and dean of the College of Graduate Studies, David Ash. Ash joined CMU in October 2005 to chair the Department of Chemistry and Biochemistry. Ash has served in his current role since 2015 and plans to retire in June.