A slice of campus sustainability

But Central Michigan University is turning those greasy cardboard containers into a symbol of campus sustainability.

At recycling stations in CMU residence halls, students deposit them in containers marked "pizza boxes" to be composted along with CMU's food waste.

"CMU is one of the leaders in the nation in sustainability programs." — Jay Kahn, director of facilities operations

For an item that's cumbersome in the trash because of bulk and unfit for recycling because of grease, it's a big leap forward.

CMU then buys back some of the resulting compost for use around campus, said Jay Kahn, director of facilities operations.

Skomski said students — from Residence Hall Assembly, Student Government Association, the Health Professions Residential College and more — pushed the idea of keeping pizza boxes out of the trash. That meshed with Residence Life Director Kathleen Gardner's goal to ship less waste from residence halls and residential restaurants to the landfill.

Last school year, those efforts focused on plastic shopping bags, which now are collected in the residence halls for recycling.

But paper or cardboard contaminated with food residue or grease can't be recycled.

Fortunately, composting — which the university has done for years with food waste — is an option.

"If it's organic material, you can compost it," Kahn said.

Skomski said there are pizza box drop-off containers in the lobbies of the Towers, Calkins, Robinson, Larzelere, Saxe-Herrig-Celani and Fabiano-Emmons-Woldt halls.

And under the direction of building maintenance workers Dave Jarosiewicz and Ryan Lewis, student employees are building more, constructing them from white laminate for easy cleanup.

"Eventually we'd like to have one in every residence hall lobby," Skomski said.

Next up are Trout, Sweeney, Merrill, Beddow and Thorpe halls. There's also a collection box at the Down Under Food Court in the Bovee University Center for pizza boxes from the new Oath Pizza restaurant.

Meanwhile, student sustainability advocates on residence hall councils continue to communicate about sustainability practices such as sorting recyclables and compostables.

"Having such a large and visible reminder facilitates conversation and educates students about the importance of composting," Fogle said. The Mason, Michigan, senior is double majoring in communication disorders and psychology and is a peer mentor in the Health Professions Residential College.

Michigan landfill fees — which fund things like brownfield cleanups — are poised to rise from 36 cents a ton to $4.44 a ton under state legislation up for consideration during the lame duck session.

"Michigan has the lowest-priced landfills in the Great Lakes region," Kahn said.

Kahn said if the fee hikes pass as expected, institutions will have even more incentive to reduce landfill waste. CMU, he said, keeps improving — to save the environment and save money.

"It's being fiscally responsible to our students," he said.

The university produces less waste overall, and sends a lower percentage of it to a landfill, than even two years ago. Recycling of glass, plastic, metal and paper; composting of organic waste; and sales of unneeded materials keep 40 percent of CMU's total waste out of the landfill, compared with 38 percent in November 2016.

"We're at about zero waste to landfills from our kitchens," Kahn said, noting that Campus Dining sends 350 tons of food scraps a year to Morgan.

"CMU is one of the leaders in the nation in sustainability programs," Kahn said. "Wherever I look, that seems to be the case."

How much pizza do students eat?

No one may know for sure how much take-out and delivery pizza students eat on campus. But we do know CMU's four residential restaurants served up tons in the most recent academic year:

Incidentally, that's 57,144 pizza boxes that didn't go into a landfill, because the restaurants don't use boxes. 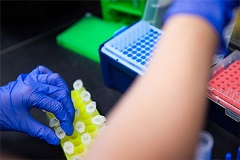 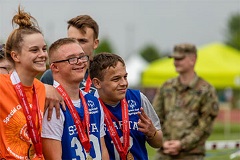