Note: The Edmore "doorstop" meteorite has landed a permanent home. Beginning in fall 2019, it will be on display at Michigan State University's Abrams Planetarium, which purchased it through a donor for $75,000 from owner David Mazurek. He plans to donate 10% to CMU's earth and atmospheric sciences department, where faculty member Mona Sirbescu first identified the rock as a meteorite. Here's the original story from October 2018.

Throughout her 18 years at Central Michigan University, Mona Sirbescu, a geology faculty member in earth and atmospheric sciences, has had many people ask her if the rock they had found was a meteorite.

"For 18 years, the answer has been categorically 'no' — meteor wrongs, not meteorites," she said with a smile.

Earlier this year a man from Grand Rapids, Michigan, asked her to examine a large rock that he has had for 30 years. She was skeptical but agreed to meet him. When he arrived, he pulled out of a bag the biggest potential meteorite she had ever been asked to examine.

"I could tell right away that this was something special," she said.

She determined that it was in fact a 22-plus pound meteorite, making it the sixth-largest recorded find in Michigan — and potentially worth $100,000.

"It's the most valuable specimen I have ever held in my life, monetarily and scientifically," she said.

The man, who asked to remain anonymous, obtained the meteorite in 1988 when he bought a farm in Edmore, Michigan, about 30 miles southwest of Mount Pleasant.

As the farmer was showing him around the property, they went out to a shed. The man asked about the large, odd-looking rock that was holding the door open.

"A meteorite," the farmer said matter-of-factly. He went on to say that in the 1930s he and his father saw it come down at night on their property "and it made a heck of a noise when it hit." In the morning they found the crater and dug it out. It was still warm.

The farmer told the man that as it was part of the property, he could have it.

The new owner lived on the farm for a few years before moving on, with rock in tow.

He kept it for 30 years — also using it as a doorstop and sending it to school with his children for show and tell.

The meteor that blazed through Michigan this January changed his life's trajectory as he read accounts of people finding and selling small pieces of the meteorites.

A friend and CMU geology alum directed him to Sirbescu in the College of Science and Engineering, where she took it to one of the labs in Brooks Hall and examined it under an X-ray fluorescence instrument to determine that it was an iron-nickel meteorite with about 88 percent iron and 12 percent nickel, a metal rarely found on Earth.

Iron meteorites typically consist of approximately 90-95 percent iron, with the remainder composed of nickel and trace amounts of heavy metals including iridium, gallium and sometimes gold.

Looking to confirm her evaluation of the rock and to properly classify and record the new find, Sirbescu cut off a slice, polished it and sent it to a colleague at the Smithsonian Institution in Washington, D.C., who validated her conclusion.

"What typically happens with these at this point is that meteorites can either be sold and shown in a museum or sold to collectors and sellers looking to make a profit," Sirbescu said.

The Smithsonian is considering purchasing the meteorite for display. If it doesn't buy the entire rock, the slice will stay in its collection. They all have agreed to name it the Edmore meteorite for now, she said.

The Smithsonian also sent the sample to John Wasson, professor emeritus in the earth, planetary and space sciences department at the University of California, Los Angeles. He is considered the guru of iron meteorites, Sirbescu said, and is doing a neutron activation analysis to determine its chemical composition. There is a possibility that the analysis could reveal rare elements that could increase its value.

A mineral museum in Maine also was considering buying it, and the owner herself — a collector — said she might purchase it.

A win for CMU

Whatever amount the owner receives, he has promised to give 10 percent of the sale value to the university to be used as funding for students in earth and atmospheric sciences.

Regardless of how much that is, Sirbescu feels that she, CMU and her students already have benefited.

"Just think, what I was holding is a piece of the early solar system that literally fell into our hands."

And she has given that same experience to students this fall, as they have been able to touch a real-life example of what typically are just photographs in their textbooks. 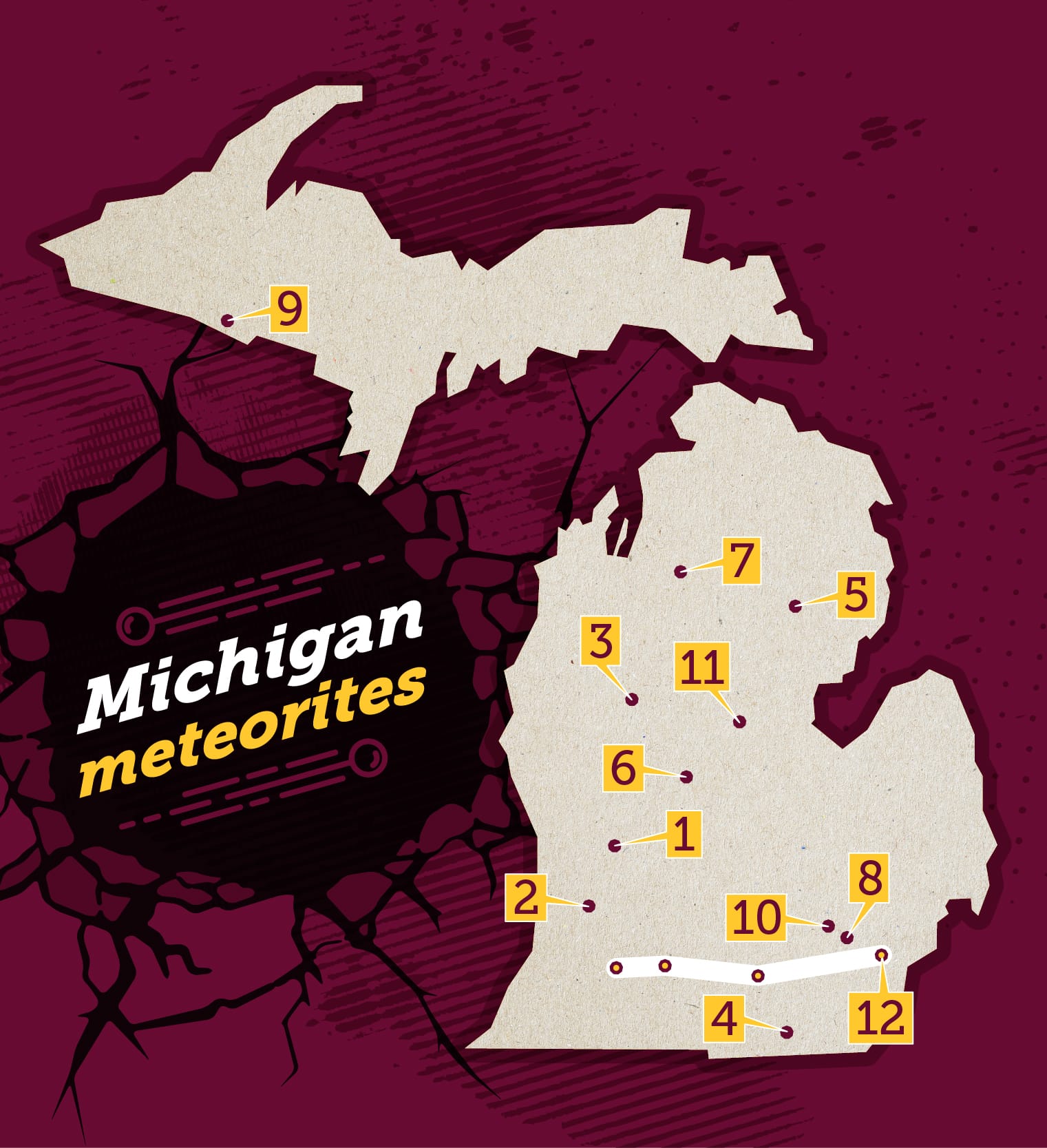 Is it an asteroid, meteor or meteorite?

Asteroid: A large rocky body in orbit around the Sun.

Meteoroid: Much smaller rocks or particles in orbit around the Sun. Millions enter Earth's atmosphere every day, but most vaporize.

Meteor: If a meteoroid enters the Earth's atmosphere and vaporizes, it becomes a meteor, which is often called a shooting star.

Meteorite: If a small asteroid or large meteoroid survives its fiery passage through the Earth's atmosphere and lands on Earth's surface, it is then called a meteorite.