Making a difference in medicine

Gretchen Holtgrefe is one of those students, researching cancer with biochemistry faculty member Ajit Sharma. The research looks to find which antioxidants may be more effective in preventing cancer. 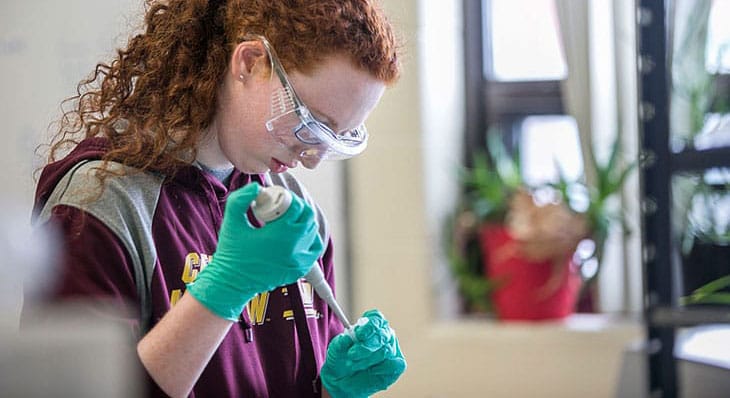 For inquisitive student scientists such as Holtgrefe, nothing is more thrilling than working to solve medicine’s big puzzles. The past year has seen many examples at CMU. Here are a few:

Opioid abuse is a rising issue in the medical field, with more than 115 people in the United States dying from an opioid overdose every day.

Juliette Perzhinsky, associate professor of medicine, is training students to fight this rise in opioid addiction by using effective treatment of pain for prevention of addiction. The training involves a collaboration among the College of Medicine, The Herbert H. & Grace A. Dow College of Health Professions, and the American Society of Addiction Medicine.

This partnership will give students exposure to the issue before they get into the field, with hopes that they will be more mindful and be able to work proactively with that patient.

Using a virus to repair damage

A team of neuroscientists and chemists found that a virus can lead to healing rather than hospitalization for patients with stroke damage.

When strokes kill neurons in the brain, glial cells come to the area to ensure the damage doesn’t expand, but they also can prevent healing in that area.

Research led by Sarah Peruzzaro, who recently received her doctorate in neuroscience at CMU, found that a virus that carries a gene called Sox2, could reprogram glial cells into neurons. By increasing the total number of neurons in the damaged area, the team hopes brain function will improve.

As a sophomore, Alexandria Couch joined biology faculty member Jennifer Schisa in her research on how women’s unfertilized eggs are maintained under stress.

“One of the best decisions I’ve made was to be in this lab, hands down,” she said.

The work they’re doing could help find answers for women’s fertilization issues and neurodegenerative diseases such as ALS, dementia and Alzheimer's disease.

An international team of students from India, Ghana and Michigan worked with chemistry and biochemistry faculty member Ben Swarts researching TB, a bacterium that infects about 2 billion people worldwide.

"It's great to be on a team that is working on such a large goal, knowing that everything you are doing makes a difference," said biochemistry major Dan Gepford.

The research focuses on designing chemical compounds that will shut down the cell envelope and stop the bacterium from spreading. Swarts expects to continue this research next semester when they open a biosafety level-three facility.

Psychology faculty member Kevin Park received a grant to research a breed of mice he engineered to reflect the gene mutations and pathologies in humans who have Alzheimer’s disease.

The project involves breeding and testing the mice to find the right combination of genes, then generating the pathologies that mimic those of humans with Alzheimer’s disease. Once this is complete, they will look for ways to address the disease.

Receiving funding for the project validated the team and added excitement.

“To know that people who are supposed to be skeptics have backed the research, it’s exciting and it keeps you going,” Tomas Barrett, doctoral student on the project, said.

Going straight to the source

Faculty member Linlin Zhao and student lab workers are targeting disease at the power source: the mitochondria of the cell.

The research looks at how damaged mitochondrial DNA breaks down and seeks ways to attack the mitochondria of the diseased cells to cut off the energy source.