Mathews was announced as provost and executive vice president on March 18 and officially began her role on Aug. 1. As the university’s academic leader, Mathews is responsible for all undergraduate and graduate programs, as well as supporting faculty and student research and creative endeavors.

Mathews recognizes the importance of her role for the university and is ready to take on the challenge. She acknowledges that collaboration is the key to success.

“I am both thrilled and humbled to join CMU.  One of my goals will be to serve as a great partner with my leadership team, the faculty and staff. I am here to empower many voices and ensure that diverse perspectives are brought to the table” she said.

Here are a few things to know about the university’s new provost as she begins her tenure here at CMU:

Invested in the work and the people behind it

Mathews wasted no time getting acquainted with life at Central, including taking in a dance performance and visiting the interior design capstone exhibits at the end of the spring semester. Over the summer she visited the CMU Biological Station on Beaver Island and met with the Research Experience for Undergraduate students at their poster session.

“It is so important that we look at what students are doing and recognize these are young professionals developing their visions for their future,” she said.

Now as an administrator, Mathews is still motivated by her background as a researcher and the human element it takes to succeed in higher education.

“Whatever it may be, I want to ensure students, faculty and staff know that the provost supports and is interested in them and what they’re doing,” she said. “Ensuring that everyone feels valued and that they belong at CMU will be a top priority.”

Loves being in nature

Mathews is a competitive sailboat racer who also loves fishing, diving and kayaking. She spends much of her personal time outdoors, especially at her family’s cottage. It makes sense that the Michigan native would base her career on her interest in the outdoors; she earned her bachelor’s, master’s and doctoral degrees in biology, specializing in wildlife ecology and conservation biology.

And her studies of biology and ecology have also shown parallels to her various leadership positions.

“As an ecologist, I am accustomed to looking at things as a system. Understanding a system in nature and a system in higher education are not unlike one another,” she said. She also brings a strong interest in and focus on sustainability.

Scholarship is important for everyone

It should come as no surprise that the new leader of academics values the far-reaching impact of the research and scholarly work happening at CMU.

“Scholarship is important because it not only builds our state, regional and national reputation, but it can reinvigorate faculty in their teaching, excite and stimulate students to learn, while also giving back to the public good,” said Mathews.

She believes the teacher-scholar model provides students the most contemporary information as it is discovered and plans to encourage that model in classrooms at Central.

She looks forward to building on the momentum of CMU’s record setting grant funding year.

Mathews describes herself as “somewhat introverted, but social” and is eager to build relationships within the university and Mt. Pleasant community.

“I love working with people. I’m looking forward to being on campus, going to events and interacting with everyone,” she said.  “But, this fall, I will be doing a lot of listening.”

Mathews encourages people to approach her to say hello, whether she is at a sporting event, showcase or simply walking through campus. She also looks forward to hearing from and working with stakeholders from across the university and the community.

“I’m accessible, interested and want to learn from others.”

Outside of work, Mathews’ two adult children, Erica and Ben, play a significant role in her life, as does her three year old dachshund, Franny. 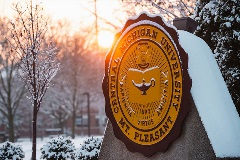 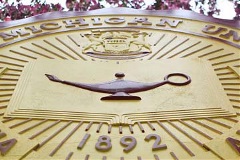 Innovating and leading through a global pandemic