Newcomb’s project focused on a previous experiment in nuclear physics. The experiment logged signals generated by beta particles on particle strips. To further analyze these results, the strips with the most beta particle events needed to be sorted between noise and data in the form of waves.

The neural networks were trained to recognize which graphs were waveforms and noise graphs. “When the network has seen a sufficient amount of each case, it should be able to take in a graph that it hasn’t seen before and make an informed decision about whether it is a waveform or a noise graph.” Through Newcomb’s work, the network has been able to classify graphs with a high degree of accuracy.

The tool will aid in data analysis in the future as CMU’s nuclear astrophysics group conducts experiments on the new FRIB particle accelerator at Michigan State University. The neural networks will also be used in other future experiments at Central Michigan University and other research centers. 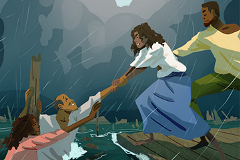