CMU women are leading in diverse spaces and places

But leadership also is a judge firmly steering wayward teens toward a brighter future. Or a TV journalist sharing life-saving news, even when it means sharing her own heartbreak.

CMU alumni lead with their heads and their hearts.

More women than ever hold leadership roles at CMU, from the Board of Trustees to the president's cabinet.

These powerful women, part of the university's history of trailblazers, talk of the importance of mentors — both finding one and being one.

'Run through the door'

Donna Terrell, '83, was a teen mom when she enrolled at CMU, her toddler daughter, Queah,
at her side in her broadcasting classes scribbling notes like Mom, but with crayons. 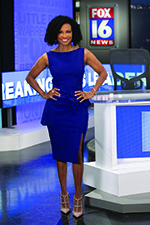 "That was not my plan," Terrell said. "But my mom always said, 'Just because you made your bed doesn't mean you have to lie in it. You're going to college.'

"So, I ran through the door and never looked back."

Terrell, news anchor at Fox 16 in Little Rock, is one of the most recognizable faces in Arkansas media, a multiple-award-winning broadcast journalist.

"I didn't go to CMU to fail, I went to succeed," she said. "I learned a lot there that stuck with me. It taught me perseverance. I told myself, 'Don't give up. Just keep trying.' I knew there was reward at the end."

And along the way, heartache. Terrell's daughter, Queah, battled colon cancer in her 20s and died of the disease.

"When Queah died, I was the walking wounded," Terrell said. "I thought, 'You raised this child through all that adversity. You made it, and she made it. And now God comes and takes her away?'"

Grief counseling helped, she said, "so I could get on with the rest of my life."
Part of getting on was continuing to tell Queah's story.

"It was so unusual for a very young black woman to get this disease," Terrell said. "Now more younger people are getting it. She wanted to warn people. She said, 'Mom, you have to do a TV story about me.'"

Terrell won an Associated Press award for her stories about Queah's battle with colon cancer.
It's just one example of the power of the news, Terrell said.

"I hear people say, 'I don't watch the news — it's too depressing,'" she said. "Yes, it can be depressing, but it's rewarding too. We can help people. We can expose something that shouldn't be happening. We can shed light on something that causes people to volunteer or help monetarily.

"If you want to make your community better, you need knowledge."

When Terrell "ran through the door" to CMU years ago, it was the start to her successful future. Now, it's her philosophy.

"Anytime there's something that will be good for you, run through the door toward it," Terrell said.

"No matter what happens, latch onto what's good."

'I always want to challenge myself'

When she started her engineering career in the male-dominated auto industry, Heather Pishalski, '92, was often the only woman in the room. 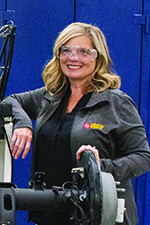 "We think differently," she said. "There's definitely a different energy when you have a woman in the room who actively and confidently contributes ideas."

Pishalski is executive director of product engineering, systems and services at American Axle & Manufacturing in Detroit, leading a team of more than 200 engineers at seven global centers around the world.

The company engineers and manufactures driveline and metal forming systems that deliver power to a vehicle's wheels. It's a highly technical field.

But Pishalski's people skills were evident early on, too.

After one of her earliest promotions, she managed employees with more years of experience than she had. One seemed reluctant about reporting to her.

Pishalski thrives on open communication, so she asked him to share his concerns, ready to field all sorts of worries.

If only all her challenges were that easy. Actually, if they were, she'd hate it.

Pishalski's days are filled with setting the big-picture strategy she loves, from how to streamline operations for increased efficiency to what kind of skills new hires should have as the company
expands into new markets, including electric axles.

She loves a challenge.

"I've always been very open-minded about defining what's next," she said. "Years ago, I didn't say, 'I want to be an executive someday.' I said, 'I always want to challenge myself.'

"Many times, I took a job that others weren't interested in. Those jobs were where I learned the most."

She loves when technicians pull her aside on the manufacturing floor to show her a new development or ask a question.

"I'm a people person who loves the engineering side of the business," she said.

Her confidence blossomed at CMU.

"Central helped me build a really strong foundation," Pishalski said. "That's where I grew up. It's where I realized I was in control of my destiny."

She was originally bound for the University of Michigan after high school but was deferred until January. So, she started at CMU with plans to transfer.

'The world was suddenly accessible'

Kandra Robbins, '90, always knew she wanted to be a lawyer. 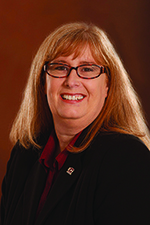 "But I didn't know judge was even a possibility," she said.

She admits it's probably her worst quality — underestimating her skills and potential.

"I think it's common for women of my generation," said Robbins, an administrative law judge for the state of Michigan.

Luckily, a supervisor along the way saw her potential. As a staff attorney, Robbins was interviewing candidates to be the next chief judge for the Sault Ste. Marie Chippewa Tribal Court.

Her supervisor stunned her by suggesting she apply.

What she didn't know, she learned fast.

Robbins, a member of the tribe, presided over all kinds of cases. She sent people to jail and had to evict them from their homes. She ruled in cases of child abuse and neglect.

"Some cases still haunt me," she said. But there was also hope and light.

Robbins was instrumental in creating the tribe's drug court and the Juvenile Healing Court that nurtured struggling preteens in trouble with shoplifting or truancy with weekly family counseling, community service and tutoring to steer them back to the right path.

"They didn't get sympathy from the bench because it was important to hold them accountable for healing," she said. She was firm. No excuses.

"As a judge, you see people for a moment, then they're gone and you don't know what the rest of their story is."

Robbins and her son were in a restaurant drive-through lane back in Sault Ste. Marie while visiting after being away for a few years.

The young woman at the window asked her, "Are you Judge Robbins?"

"Every once in a while, you get a moment that makes you feel pretty good," Robbins said.

Robbins grew up in the small northern Michigan town of Bliss, graduating in a class of 53. Everybody knew everybody.

"Central was a place where the world was suddenly accessible," she said. "There were no built-in expectations. It was a place for me to discover who I was."

As the new president of the CMU alumni board, Robbins is passionate about "letting the whole world know how fabulous Central is," she said.

"That sense of curiosity and wonder I experienced there is something I still draw on today."

'I followed a path I envisioned' 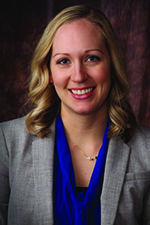 Kelly Gerstenberger, '10, loved that part of her role as president and CEO of Exchange State Bank in Carsonville, in Michigan's Thumb region.

"We were able to help small businesses and farmers access those funds when they really needed them," she said. "We were willing to help, no matter how small the customer."

"I followed a path I envisioned, but I didn't imagine it would happen this fast," she said. She's a bank president and CEO at age 33.

Ask the secret to her success, and it shouldn't be surprising the accounting major offers up a formula.

"Hard work and dedication certainly play a large role," she said, "as well as being open to opportunities as you're presented with them."

In the movies, bank presidents are always well-dressed and serious, with an air of importance, but you never quite see exactly what they do.

"When you're president of a community bank, you wear quite a few hats," Gerstenberger said. (Fun fact: 10% of Michigan's community banks are run by CMU alumni.)

It's a numbers job, of course, about finances and auditors and bank examiners.
But it's a people job too, hashing out challenges along with bank staff and the board of directors.

Her time at CMU prepared her to wear all those hats.

"The business degree at Central is so well rounded," she said. "I didn't just learn accounting, but I learned marketing and human resources and how to give presentations. In this role I need to know all those things."

Gerstenberger loves the connections that come with working at a community bank.
"There's a more personal touch," she said.

That personal touch was part of the celebratory hoopla in June when the bank celebrated its 120th anniversary.

They gave gift cards to customers, who could then choose a local nonprofit to receive the same amount as a donation from the bank.

Gerstenberger holds her own community of Sandusky, Michigan, close. She's often out and about at school and sports events with her husband and three young sons. She went to school there, too.

"Being active in the community is very important to me," she said. "Exchange State Bank opened in 1901, and being community minded has always been a core value of ours.

Being a part of that legacy and continuing it means so much."

If you're in a coolest job contest with Natasha Tolentino, M.S.A. '14, chances are, she wins. 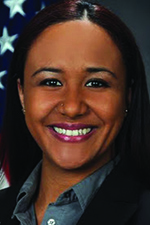 She helps develop flying cars, although in the U.S. Air Force, they call these vehicles electric vertical takeoff and landing (eVTOL) systems. Or organic resupply buses — ORBs for short.

They're electric-powered vehicles with names like Hexa that rise from the ground with helicopter-type rotors and speed through the air at more than 100 mph.

Tolentino is lead program manager for Agility Prime, the U.S. Air Force's commercial development program for these flying vehicles. She uses the resources of the Department of Defense to speed up their research and development for commercial use.

"The military application is well and good, but this isn't about painting them military gray and strapping bombs to them," she said. "Think about big cities like Los Angeles, New York and D.C., where you spend an hour on the road to go 10 miles.