Before fifth-grade teacher and spelling test prankster Joe Dombrowski graduated from Central Michigan University in 2012, no one could have known the viral fame that lay in his future — or how he would parlay it into even greater success.

But a few people might have had a hint.

“He’s impacting other teachers all over the place.” — Nancy Dodson, university coordinator

"Usually most student teachers are a little bit nervous," Dodson recalled, so when someone paged Dombrowski to leave class in the middle of social studies, she didn't know what to expect.

"A few minutes later, he comes back into the classroom dressed like (17th century English Puritan lawyer) John Winthrop — the subject of the lesson — with a gavel and robe and fake beard.

"Afterward, I heard students saying 'that was the best social studies lesson ever,'" Dodson said. "He made it come alive for them."

Dombrowski remembers Dodson telling him there was no doubt he'd found his calling.

"Hearing words of affirmation like that, it really shows that the people at CMU are looking out for you," Dombrowski said.

That's one reason he flies an "Action C" flag in his Seattle-area classroom, next to his degree, a cutout "C" and a collection of CMU magnets.

On Sunday, undergraduate honorary society Kappa Delta Pi and the College of Education and Human Services brought Dombrowski — now widely known as "Mr. D" — to campus for his second visit since he first gained internet fame in 2017. 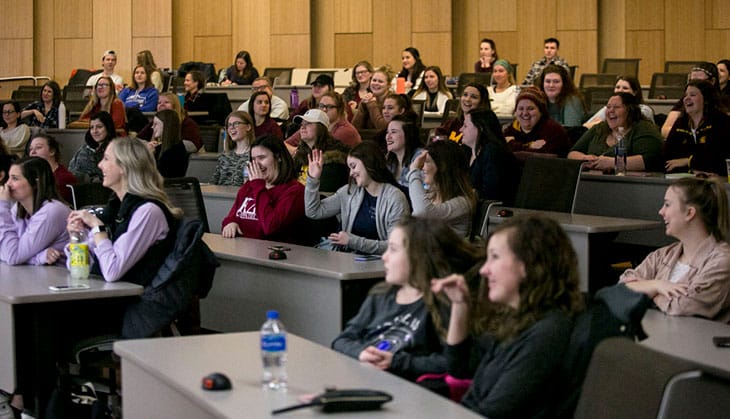 Smiles and laughs filled French Auditorium in the Education and Human Services Building as Dombrowski paced the room, imparting lessons ranging from common sense (don't post pictures of yourself drinking) to insightful (if you're going to teach, try out every grade).

And when you encounter rules that don't help students, he advised, bend them within reason. Without risk, there's no reward.

"You know you've made it when you have some haters," he said.

Dodson drove two and a half hours from home to see her former student.

"He's impacting other teachers all over the place," she said, "and that's what I really like."

Returning to CMU and catching up with his professors and mentors is special, Dombrowski said, but travel is nothing new: He tours the country as both a motivational speaker and a standup comic (having gotten his start in comedy with CMU's Trap Door Improv).

But he limits his touring to weekends, at least during the school year.

"On top of all the comedy and everything I'm doing, I'm still a fifth-grade teacher," he said.

Wherever he goes, Dombrowski stresses the importance of quality — and authentic — teaching.

"I keep it so real," he said. "I push the teachers to be their true selves. Kids can smell fake."

Dombrowski encourages educators to tap into the drive that led them to such a challenging profession in the first place.

"What better way for kids to discover who they are than to look up to someone being their true self," he said.

That's something he learned at CMU, where instructors — sometimes skeptically — gave him room to follow his vision for classroom success.

"Central really pushed me in ways that I didn't expect, but what it really did was let me go," he said.

"A dream and a drive"

Dombrowski's sense of daring led to his first big moment in the limelight, when he recorded his Royal Oak, Michigan, fourth-graders taking a pop spelling test of words he had made up for April Fool's Day 2017.

The video of his baffled students slowly catching on quickly tallied millions of YouTube views.

"When that took off, it really opened up a lot of doors," he said.

One of those doors was to "The Ellen DeGeneres Show," where Dombrowski appeared as a guest and received gifts of $20,000 for himself and his elementary school.

Since then he's also discussed teaching on "Good Morning America" and the "Pickler and Ben" talk show.

He even caught the eye of ABC's "The Bachelorette" after recording his mom — a huge fan — hanging up on him for calling during the show's broadcast. The show treated the two of them to a VIP visit.

Life and career never let up, and Dombrowski wouldn't have it any other way.