During its formal session Thursday, April 21, the Central Michigan University Board of Trustees voted to temporarily delay a decision on the proposed Washington Commons residential community project.
Following discussion in the Finance and Facilities Committee meeting Wednesday, the board agreed to revisit plans for the four-building residential community on or before Sept. 30, allowing the university to focus first on the budget process and to address concerns raised by students, faculty and staff.
Trustee Edward Plawecki Jr. said the decision to postpone will allow the university to pursue the most prudent path forward.
“We will continue to take in meaningful information to make an intelligent decision, which will be in the best interest of Central Michigan University,” he said.
In a written proposal for board action, the trustees also noted, “providing quality, affordable student housing on campus remains an important part of our enrollment strategy and will remain an important part of CMU’s capital improvement plan.”
The board voted to move forward with previously approved projects, including demolition of Kewadin Village apartments, the development of a new parking area, lot 75, for first-year and special event overflow parking, and design and modifications to existing parking lots 39 and 43.
Budget
Board Chair Richard K. Studley said trustees are working with university leaders to prepare a variety of budget scenarios for the year ahead. Instead of across-the-board cuts, CMU will instead make strategic investments in priority areas and reductions in areas that make sense, he said.
“In the upcoming budget process, know that our top priority must be student success,” he said. “We will encourage and support those programs that have rigor, relevance and excellence and can produce demonstrable results in terms of student success.”
CMU President Bob Davies said he will present a balanced budget proposal to the board at its June meeting.
Other board action
Trustees approved 2,509 May graduates, who will be recognized during commencement ceremonies May 6-7 in McGuirk Arena, inside the John. G. Kulhavi Events Center.
“Earning a college degree is never a small feat; earning a college degree during a global pandemic is truly a monumental achievement,” Davies said. “Our graduates have shown remarkable grit and determination.”
Trustees also presented emeritus status to nine long-serving CMU faculty and staff members, accepted the contributions report for the quarter ended March 31, approved naming opportunities, and approved new scholarships and endowments.
Highlights from Wednesday’s committee meetings included:
President’s report
In his opening report to the board, CMU President Bob Davies shared an update on CMU’s enrollment projections for the coming year.
“We can, and we should, celebrate these first steps in the right direction. But we also need to recognize that these are preliminary and we will still have enrollment challenges and pressures,” Davies said.
Davies noted that CMU currently projects enrollment increases for first-time-in-any-college, transfer and international students, as well as increases for both undergraduate and graduate students in CMU Global Campus and online programs.
He also acknowledged a wide range of accomplishments and achievements by CMU faculty, staff and students, such as:
“Our university is strong,” Davies said. “It is strong because of the efforts of our faculty, staff, students, alumni, supporters and partners. We are viable, and the work taking place at our university every day is vital to our community, our state and the people we serve.” 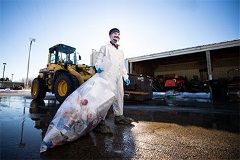 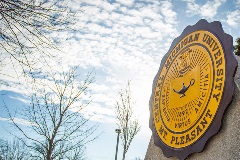 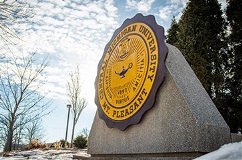 CMU delayed due to inclement weather on March 30