Graduate student Edwin Williamson, in the Department of English Language and Literature, completed Pierce Cedar Creek Institute’s “Nature in Words” Fellowship during the summer of 2022

Edwin Williamson, a graduate student in the Department of English Language and Literature, completed Pierce Cedar Creek Institute’s “Nature in Words” Fellowship during the summer of 2022. The fellowship recipients lived on-site in a house together for several weeks during July and August and were given the opportunity to work on creative pieces or explore the grounds they were staying on, as well as connect with mentors in their fields.

During his time there, Williamson wrote a collection of seven finished poems, and began work on several others. He also spent his time reading, working on art pieces, hiking, and building connections with fellow students and mentors. The mentors were able to share their experiences in both a professional and casual sense, giving career-based life advice. “It felt cool talking to people who were professors and have them talk to you like you were equals,” said Williamson.

The fellowship also gave Williamson the ability to create more connections with his peers, providing opportunity to collaborate and work on new projects with people in the future. There was no single thing that impacted his art the most but he says “one of the best things was getting to be with other people.” Williamson also stated that the fellowship “gave me a new perspective that showed more of an out-in-the-world doing creative things instead of an in-class experience.” Going forward, Williamson is considering going into editorial or publishing works but hopes to continue writing poetry for a long time. “It feels good to know that this is something that I can do and something I can continue doing,” said Williamson. “I have a lot to be grateful for from the professors who wrote my letters of rec...and for a lot of help and support.” 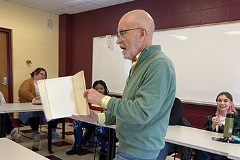