​Daelyn Woolnough is once again getting her feet wet to help an endangered species of freshwater mussel keep a mid-Michigan river clean.

Woolnough is a Central Michigan University Biology research associate professor, a member of CMU's and an authority in freshwater mussel conservation. She and her team of CMU student researchers are working with the Michigan Department of Natural Resources, U.S. Fish and Wildlife Service, Ionia Conservation District and Consumers Energy to propagate rare snuffbox mussels at Consumers' Webber Dam on the Grand River in Ionia County.

"Snuffbox conservation allows for them, and the 21 other mussel species around Webber Dam, to filter water of contaminants and help to naturally clean the water," Woolnough said.

Snuffbox mussels were designated an endangered species in 2012 in the U.S. and in 2001 in Canada. They are globally rare with larger populations in Michigan, as documented by CMU. They now are known to exist in only 79 streams in 14 states and one Canadian province. Historically they were known to inhabit 210 streams and lakes.

Discovery of snuffbox mussels on the river in 2013 before the removal of the obsolete Lyons Dam initiated a project Woolnough led to relocate and conserve their population during and after the dam removal.

But when the dam was removed in 2016, sediment carried down the river degraded some of the mussels' prime habitat.

It's a strange journey that takes the mussels to their new home. CMU student researchers add microscopic mussel larvae, called glochidia, to water inhabited by fish called common logperch. The larvae attach — harmlessly — to the fishes' gills like microscopic Pac-men for a short period of the snuffbox lifecycle.

The logperch are transferred to cages in the DNR's Webber Dam fish ladder about 15 days after being exposed to the glochidia and spend another two to four weeks there, during which time the larvae keep maturing and eventually drop off into sand and gravel in the cages.

Woolnough said the mussels will grow in the cages for about 16 months, until they are about half an inch long. With CMU's help, DNR biologists will then tag and release the young mussels back into the Grand River at sites further downstream where snuffbox had been found from 2013 to the present, augmenting the declining population.

Consumers Energy will keep water flowing through the fish ladder to support the project. The hydroelectric utility normally diverts water to the fish ladder just twice a year, for salmon and steelhead migrations. 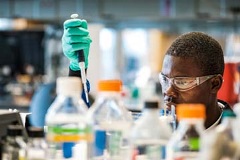