When historic floods breached two mid-Michigan dams in May, emptying Wixom Lake and Sanford Lake, Daelyn Woolnough saw a consequence few others might have considered: the loss of water-filtering mussels — some rare — by the tens of thousands. 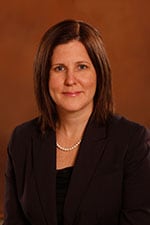 Woolnough, a Central Michigan University research associate professor in Biology, is a member of the Institute for Great Lakes Research in the College of Science and Engineering. She's studied the influence of contaminants on native mussels and the host fish that disperse their larvae, the effects of dams and dam removals on mollusks in Great Lakes watersheds, and aquatic habitats in urban and agricultural landscapes.

Now, at the request of the Michigan Department of Natural Resources, Woolnough and a team of CMU graduate and doctoral students are working at the Tittabawassee and Tobacco rivers after the failure of the Edenville and Sanford dams. They're assessing the impact of the river's drainage on the native freshwater mussel population, joined by members of the MDNR and the Michigan Department of Environment, Great Lakes, and Energy.

Here's Woolnough's perspective as a CMU expert on freshwater mussels.

Q: Why is there concern about the mussels?

A: Freshwater mussels are important to our rivers because they take chemicals out of the water as they filter it for food. They actually conduct a free ecosystem service for us that works better than a wastewater treatment plant. Mussels also add stability to the bottom of lakes and rivers to prevent erosion. Also, among the mussels in these rivers are the federally endangered snuffbox mussels and up to five other state-endangered or special-concern species.

Q: How and where did you find them?

A: Mussels cannot move fast and, unlike fish, cannot move with the moving water. Therefore, any mussels that were on the bottom of the lakes, and not in the main river channel that runs through the middle of the lakes, remain on top of soil in dewatered areas and are dead or dying. The numbers are likely to be in the tens of thousands.

Q: What can be done to restore the numbers?

A: Generally, live mussels found in a situation like this would be returned to the closest body of water with appropriate habitat for their survival. Sometimes, because we have the facilities at CMU in the Biosciences Vivarium — and if the mussels are rare, as some are in this case — we can house them in quarantine until colleagues in state or federal agencies decide, in conjunction with CMU's guidance, when and where to return them.

Q: What is your overall assessment?

A: Native freshwater mussels can live for more than 75 years. Mussels in areas like Sanford or Wixom lakes can live 15-30 years. In an event like this, the major problem is that you lose huge numbers of entire generations. And even with hatchery services — like what we can do at CMU — young mussels are pretty difficult to reproduce. They take two to four years before they become reproductively viable. So, even with repopulation from the mussels still in the adjacent rivers or using hatchery-reared mussels, it will take five to 10 years to repopulate the lakes if the dams are fixed.