Central Michigan University physics faculty member Matt Redshaw and his students are proud to be making a big deal of almost nothing.

They are working to help determine the precise mass of neutrinos, the "ghost particles" of the universe that for many years scientists didn't even know existed because their mass is near zero. Billions of them are thought to have been born during the Big Bang, and knowing their mass would contribute to theories of how the universe evolved, Redshaw said.

"There are enough of them that they can exert a gravitational influence on the universe," he said.

But because they are so tiny, measuring their mass has proven nearly impossible. The best measurement that scientists have been able to make is putting upper limits on its mass. The most recent measurement, made in September in Germany, said it can't have mass of more than 1.1 electron volts, or about one five-hundred-thousandth the mass of an electron.

"Knowing that number is good enough to put limits on some theories," Redshaw said. "It helps determine its place in the development of the universe — one more piece of the puzzle." 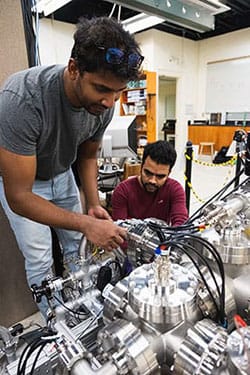 Redshaw and his graduate and undergraduate students in the College of Science and Engineering want to do better. They are building an advanced Penning trap that, combined with measurements from research groups at Los Alamos National Laboratory and in Germany, promises to deliver a more precise upper limit measurement of the neutrino mass. A Penning trap uses static electric and magnetic fields to confine charged particles for measurement.

"Our goal is to do these measurements more precisely than you could do at an existing facility," he said.

There are about four or five such traps in the United States and Canada, Redshaw said. One of them is at the Argonne National Laboratory in Chicago. Another is at the Facility for Rare Isotope Beams/National Superconducting Cyclotron Laboratory at Michigan State University, which focuses on short-lived rare isotopes.

"Redshaw's experiment pushes the precision frontier at a level that we can't do," said Ryan Ringle, senior physicist at the FRIB/NSCL.

"Having a precise measurement of the mass is extremely important," he said.

Redshaw makes sure each student takes part in the experiment.

"The goal is to give our master's and doctoral students an opportunity to do something that is cutting edge," Redshaw said. "This experience will put our students at the forefront of their field."

"This experience will put our students at the forefront of their field." — Matt Redshaw, physics faculty member.

Likewise, undergraduates gain a great deal of understanding participating in and seeing what real research looks like, he said.

"At CMU, because our department is fairly small, basically all of our students get the opportunity to work one-on-one with a faculty member. That's something you don't necessarily get at other universities," Redshaw said.

A $750,000 five-year grant from the Department of Energy is funding the research and development of the trap.