It's not always easy to measure popularity, but a few key numbers can help.

What caught the fancy of the people behind those numbers? Here are 15 CMU stories the audiences on those three social media channels found to be among the most engaging in 2018-19:

Because not all college students have reliable access to food, CMU's new Student Food Pantry is helping students stay focused and well-fed. The Mary Ellen Brandell Volunteer Center runs the pantry in the lower level of Robinson Hall. "If you need assistance, we're here to help you," said pantry graduate assistant Kourtney Koch.

Social media followers picked up on the stories of CMU students chosen for prestigious national scholarships, fellowships and awards through the National Scholarship Program.

"We are more than a university"

The CMU community and guests from around the country gathered for the official investiture of President Bob Davies, who called on faculty, staff and students to dedicate themselves to ambitious ideas and bold action to move the university forward: "The attitudes and behaviors we exhibit today and every day — the decisions we make today and every day — set the tone for Central Michigan University's next 126 years."

A champion for small towns

James Johnson's head start on his dream career resonated with many on social media. The political science major from Marion, Michigan, landed a full-time position as a legislative aide in constituent relations with Michigan state Rep. Jason Wentworth — a role that would have brought a smile to Johnson's late father, a lifelong public servant. "I help our constituents resolve issues and connect with the right government departments to deliver services they need," Johnson said. "It feels great to know I am making a difference in their lives."

Part of the "Fired Up" family

Alan Reno was among nearly 600 students who received his MBA from Central Michigan University in December. He also has spastic quadriplegia cerebral palsy, uses a wheelchair — and is unstoppable in his educational pursuits. "I wanted a life of independence," he said. "That's part of the reason that I'm at CMU."

It's known as FELC, the Future Educators Learning Community, and faculty member Jamie Brown calls it a new way to cross departmental lines and immerse freshmen in fundamentals of becoming a teacher or other education professional. "We have these great programs, and we need to avoid being in our own silos," Brown said. FELC merges three teacher education-related courses into one. 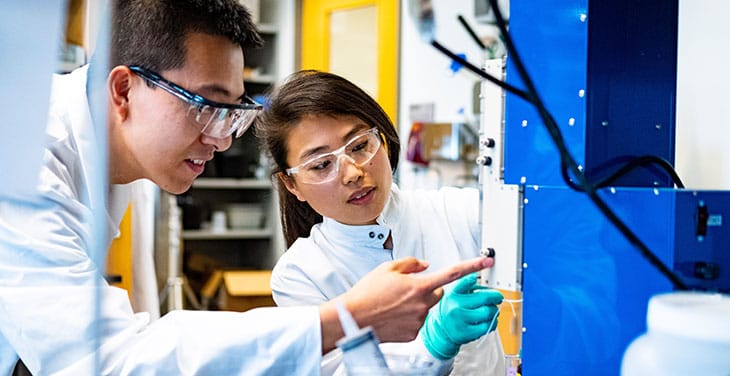 Imagine pulling the plug on Parkinson's disease or cancer by targeting the fuel of human cells. Faculty member Linlin Zhao and student researchers are focusing on the mitochondria that produce about 90 percent of the chemical energy in the cells of every complex organism and that cells need to survive.

A five-year, $1.5 million grant from the National Institute of General Medical Sciences supports their research.

Faculty member Steve Adler can click off the names of dozens of CMU graduates working in pro sports as a result of the Sport Sales and Marketing course he created. A large portion of the course is dedicated to the art of ticket selling. "Ticket sales are the life blood of revenue generation for sports organizations, and selling is the most common way in the door," Adler said.

When a stranger asked her to examine a large rock he'd been using as a doorstop, faculty member Mona Sirbescu doubted it could be a meteorite. Most "finds" are duds, but she identified this one as the sixth-largest meteorite ever found in Michigan. The story went viral, and now the Edmore meteorite will go on display at Michigan State University's Abrams Planetarium, which purchased it through a donor for $75,000 from owner David Mazurek. He plans to donate 10% to CMU.

Kindness agents on the loose

Secret kindness agents were on a mission last year to spread goodwill on campus: picking up trash, paying for strangers' meals and leaving thank-you notes for campus custodians. "Seeing these little acts of kindness always reminds me how special it is to be part of a community that genuinely cares," said Ann Krzyzaniak, residence hall director in Trout Hall. The unidentified conspirators are still out there.

Taking medicine to the streets

The medical exam could have occurred at any doctor's office, but instead it was in a parking lot, on a bus, in Mount Pleasant. It's street medicine, CMU style. College of Medicine student Samuel Jackson leads the charge, backed by interdisciplinary students directed by Dr. Bethany Brown. After he met a patient in crisis, he said, "I knew then that I wanted to continue to work with people in need." 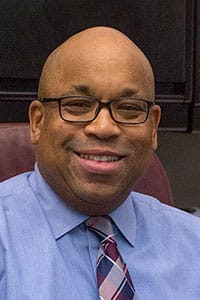 "Although this is an individual honor," Shingles said, "it could not have been achieved without the unyielding support of CMU and my outstanding University Recreation teammates over the past three decades."

Baby, it's cold – or maybe hot

The Center for Merchandising and Design Technology threw an unconventional baby shower for "Lumi," a high-tech thermal research mannequin the size and shape of an infant. Faculty and students use it to test baby gear — bedding, clothing, car seats and more — for comfort and safety. "Very few universities have these tools," said CMDT lab coordinator Susanne Wroblewski. "CMU wants students to have access to the latest and greatest." 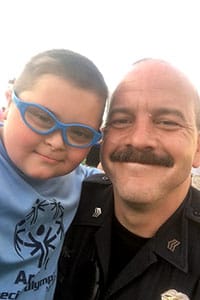 In the depths of winter, CMU Police Sgt. Riley Olson warmed his toes and heart in Abu Dhabi, United Arab Emirates, as a member of Law Enforcement Torch Run for Special Olympics.

"How can you turn down a trip like that?" he asked.

Riley helped carry the ceremonial flame for the Special Olympics World Games — the only Michigander out of 100 runners.

Research for the real world

Sara Moylan knew her Shefit Ultimate Sports Bra was an amazing product. Thanks to research at CMU's Motion Analysis Center, the 2002 alum has the data she needs to market it. "We believed we had the best product. But from a marketing perspective, we not only wanted to say it, we wanted to show it," Moylan said of the product testing. The center features cutting-edge motion capture technology, virtual reality equipment and more.