​As Flint, Michigan, continues to grapple with the effects of the city's water crisis, years of disinformation and mistrust appear to be impacting residents' willingness to receive COVID-19 vaccines.

At one point, the Flint area ranked fourth in the nation for the highest COVID-19 outbreak numbers relative to population. Yet, even as COVID-19 vaccine distribution ramped up across the state in the winter and early spring of 2021, the percentage of Genesee County residents who had received at least one dose of any vaccine remained low at just over 21% by mid-March.

Cedric Taylor, associate professor of sociology at Central Michigan University, was paying particularly close attention to those numbers. Taylor has a strong personal and professional connection to the Flint area, having written, directed and co-produced the 2018 documentary film "Nor Any Drop to Drink: Flint's Water Crisis," which focused on the human toll of the public health emergency.

"I knew that this would be a kind of a double whammy," he said. "At some point, the conversation became more than just who was getting sick and who was dying from the COVID pandemic; it now switched to the whole idea of vaccination."

Taylor wanted to get a better overall picture of the vaccination efforts in southeast Michigan. To accomplish this, he enlisted the help of Margaret Kessler, a sophomore research assistant from Swartz Creek, Michigan, majoring in biomedical sciences, and Dilshani Sarathchandra, of the University of Idaho. Together, they conducted a 25-day study investigating vaccine hesitancy in Flint, Detroit and the surrounding areas.

"The fact that the Flint water crisis would have had an impact on vaccine hesitancy does not surprise me," Taylor said. "There is a low amount of trust with regard to local government, with regard to scientists and various institutions — it was always there. But the Flint water crisis made it worse, because the perception is that public health professional officials lied and that they're likely to lie again."

An opportunity for change

"People have these issues of trust, but they're also willing to know more about the vaccine. And I think that is a real opportunity," he said.

"Consistent messaging is crucial. Not only in the media, but also from influential members of the community," he said. "Those delivering the message also need to come from a place of understanding as to the many reasons why people may be hesitant to take the vaccine in the first place. And if there are any discrepancies, people are just going to put up their walls."

While the messaging itself is crucial, so too is the timeliness of that messaging.

"This is a very fast-moving situation," he said. "There's a lot at stake today, here and now in the real world, and it's important that this research gets out there."

In the short term, Taylor will share his findings with health departments throughout Michigan. As this initial survey focused mainly on African American and white households, he plans to gain even more context by examining additional races and ethnicities in future surveys.

In the long term, Taylor intends to author a number of papers over the next three to four years focused on the compounding effects of the Flint water crisis and the COVID pandemic on people's sense of trust and risk. To leave or not to leave 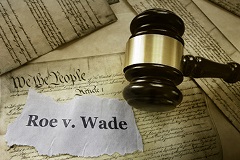