Continuing Central Michigan University’s ongoing commitment to keep education within reach for students and their families, the CMU Board of Trustees today approved a 3.53% increase in lower-level undergraduate tuition rates for 2022-23 during its formal session this morning.
Even with the increase, CMU continues to offer outstanding value to students, families and the state, said CMU President Bob Davies.
“Our goal is to make sure that we remain affordable and accessible. We are very mindful of this and so we never take a tuition increase lightly. It is part of our effort to make sure we always have high quality academic programs and provide excellence for our students,” he said.
Tuition for lower-level undergraduate students (those with fewer than 56 credit hours) will increase $15 per credit hour, or $450 per year. Rates for upper-level undergraduate, international, masters and doctoral students also will increase.
CMU’s tuition rate increase, which follows increases at most other Michigan colleges and universities, remains below the tuition restraint thresholds set by the Michigan House, Senate and Governor.
Trustee Ed Plawecki noted that even with the increase, CMU remains one of the most affordable institutions in Michigan,
“Of the 15 public universities in Michigan, as a general rule, our undergraduate and graduate tuition rates rank about 11th to 12th highest compared to the other 15, favorably,” he said.
Based on tuition data released to date, Plawecki said, only four institutions will have lower tuition and fees.
Davies also said the impact of the tuition rate increase would be offset by a significant increase in scholarships and financial aid, including the extension of need-based aid to students in their junior and senior years and continued investment in CMU’s Maroon and Gold scholarships, which are tied to a percentage of tuition.
“As tuition increases, so does the amount of the scholarship, helping to minimize the impact of these necessary, modest adjustments,” Davies said.
A complete list of 2022-23 tuition rates will soon be posted to the university’s tuition and fees webpage.

“A plan to achieve our goals”

The board also approved a $434.7 million operating budget for fiscal year 2023, which begins July 1.
“When we build a budget, it needs to be reflective of our strategies and our priorities. We need to align those resources with those priorities,” said Vice President and Chief Financial Officer Nick Long. “One of the priorities, for instance, is quality education at a reasonable cost…and that’s a big part of aligning our resources accordingly. Our revenue’s going to vary, but those priorities — they don’t change.”
The approved budget includes strategic allocations for:
Long noted that the budget included conservative estimates for revenue from state appropriations, which should be announced soon, and lower revenues from tuition as the university begins to turn around more than a decade of enrollment declines.

In his opening report to the board, President Davies said CMU expects to welcome a larger incoming freshman class for the first time since 2014.
Although final enrollment numbers will not be confirmed until September, Davies said all leading indicators suggest CMU will see enrollment increases in new first-year undergraduate, transfer and international students. He said CMU also expects to see significant increases in enrollment in CMU’s online programs.
During his committee report to the board, Trustee Todd Anson said the projected enrollment increases reflect the work of faculty and staff to address and turn around decades of decline.
“This September should be a moment of validation for CMU of all of our re-engineered recruiting function and can serve for all of us as a foundation and template for future success,” Anson said. “Our board is heartened to receive this encouraging news.”

In other board action, Trustees approved a proposed name change for CMU’s off-campus and online programs.
The unit previously known as Global Campus will move forward as CMU Innovation and Online, and will focus on delivering high quality, flexible educational opportunities for current and future students.
“There is significant and increasing demand for more flexibility in higher education, both in terms of how and where students attend classes, and in the types of educational credentials they seek,” Davies said. “We are positioning CMU to reclaim its prominence in distance learning and become the leader in this high-demand market, here in Michigan and beyond.”
Betty Kirby, who most recently served as interim dean of the College of the Arts and Media and also was dean of the College of Education and Human Services, will serve as vice president of the new unit. Since 2019, Kirby also has been a co-convener for pathway five of CMU’s Strategic Envisioning Process, which focused on reimagining CMU’s approach to lifelong learning.
“With this shift, we are well-positioned to help Michigan reach its goal to help 60% of Michigan workers complete a post-secondary credential by 2030,” Davies said. “We can help to close the skills gap in Michigan and fuel our state’s economic growth.”

In other action, trustees also:

As he closed his report to the board, Davies announced a record-setting year for research and creative activity at CMU.
At the time of the meeting, Davies said CMU had surpassed its previous record for research, $20.8M in 2010-2011, and expected to reach nearly $24M as the fiscal year closes.
“This tremendous increase is the result of the hard work, passion and commitment of our faculty,” Davies said. “The funds support their vital work in areas including health and wellness, science and engineering, education and family services, community impact and the arts, and more.”
A transcript of President Davies’ report will be posted on the president’s website later this week. 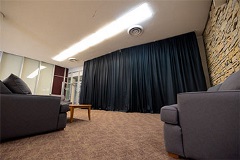 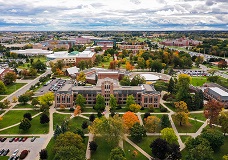 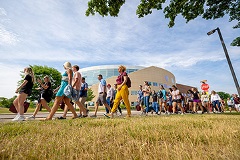