Two grants from MTV’s Early Voting is Easier Campus Challenge will boost Central Michigan University’s ongoing efforts to increase student voter participation.
Erica Johnson, director of the CMU Mary Ellen Brandell Volunteer Center, said CMU was selected to receive $8,000 from two Campus Challenge awards. The funds will be used to help students get registered and empower them to vote, despite the challenges many face trying to get to their polling place, she said.
“Most students are registered to vote at their permanent home address, which may be several hours or more away from campus,” she said. “Many are unable to get back to their home voting site on election day to cast their ballot, either due to lack of transportation, class or work schedules, or simply the time it takes to get there.”

Bringing the vote to CMU

Bringing voting access to campus ensures that students who want to vote can still participate in important elections that impact their lives, as well as those of their friends and families, Johnson said.
“Understanding the issues, learning about candidates and proposals, and voting are all part of participating in our democracy,” Johnson said.
Johnson applied for and received an initial $3,000 grant from MTV in early 2022. That first grant was designated to cover a student staff member’s time in their efforts to boost voting efforts on campus, she said. Those efforts included educational outreach during freshman and transfer orientation, tabling events and speakers during IMPACT and Leadership Safari, the Fire Up the Vote event on National Voter Registration Day, and more.
Based on the success of those efforts, MTV awarded CMU an additional $5,000 to support the “vote early” activities planned for the month of October. On Oct. 11 and 18, the Mount Pleasant City Clerk's office will be on campus to help students find their polling place, request an absentee ballot or register to vote in Mount Pleasant. The funds will also support a larger event: the Vote Early Day Spooktacular.

From 11 a.m. to 1 p.m. Friday, Oct. 28, CMU will host the Vote Early Day Spooktacular in front of the Bovee University Center. Johnson said the event will feature costumed volunteers helping students make a plan to vote, find nonpartisan information about candidates and issues in their area, and get registered if they haven’t done so already.
Stations at the event will include a werewolf-themed “HOWL you get to the polls” table, designed to help students make a plan to get to their polling place, and a pumpkin-themed “Don’t let your ballot catch you off GOURD” table, with sample ballots so new voters know what to expect. Johnson said MTV and the Campus Vote Project are providing special give-away items, and funds from the grants will provide food and entertainment for the event as well.

Voting is central at CMU

Johnson said CMU was already involved in the Campus Vote Project, a nonprofit organization that works with colleges and universities nationwide to educate and inform student voters. Volunteer Center staff attended the CVP voter summit earlier this month, and the CVP Michigan Coordinator will be presenting on campus for the annual Issue Day voter engagement conference on October 21.
In addition, several campus entities have worked for years to increase voter turnout at CMU, including Central Civics, based in the Volunteer Center; Central Votes, a registered student organization; and the Central Voter Coalition, a partnership effort involving multiple campus departments, community organizations and student groups. In recent years, those efforts have paid off: During the 2020 election, CMU student voter turnout surpassed the national average.
Johnson said that campus partners universitywide are committed to continuing this work.
“Responsible citizenship is part of our university mission, and we want to be sure students have the information, tools, resources and support to be engaged citizens,” she said. 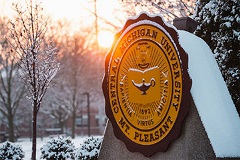 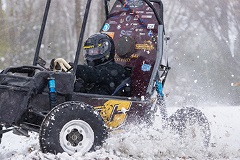 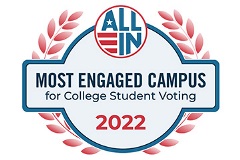