In 1949 Mr. E. Hawley of Stone Harbor, New Jersey purchased a house from the Aladdin Company. His story is representative of the many customers who went through the process of purchasing a pre-manufactured home from the Aladdin Company. Many of their customers, after having rented property for many years, decided that Aladdin proved a viable option in design features, choice of model, and especially cost.

Contact with Aladdin and Visiting the Factory in Bay City 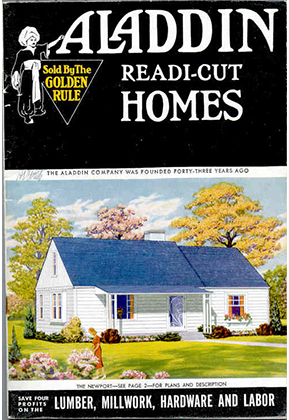 The catalogs themselves were originally advertised in a varied selection of magazines and local and national newspapers. The 1949 catalog presented Mr.Hawley with over thirty-five models to choose from, most of them smaller 'four squares' with two to three bedrooms. Their primary appeal was the self-construction feature which inevitably saved on cost and allowed the customer to become part of the design process. In choosing his house Mr. Hawley weighed up his options of function, design, and personal style. The catalogs presented possible design alterations from removal of whole rooms to additions such as garages and porches. Additionally, the position of the house could be rotated 90 or 180 degrees to suit the allotted plot of land. The catalogs also presented the opportunity to explain the design and construction process and a complete selection of features available. They also proved a useful vehicle for advertising as they often featured some of the many testimonials the Aladdin Company received.

You will remember me back in 1915 when I bought your Georgia No. 2 and nestled it in the hillside where it sparkles like a jewel in the sunshine today. We have been very happy in the past 33 years in our Aladdin home and we are always proud to tell our friends where we got it. We now have three grown up children and five grandchildren to share our beautiful home whenever they care to visit us.

Kindly mail me catalog with prices and delivery on your read-cut houses. I built one of your houses over 30 years ago. Did most of the erection myself and was quite pleased with the job, materials and all.

Contact with Aladdin and Visiting the Factory in Bay City

Contact with Aladdin
Two weeks after Mr. Hawley received the catalog, the Aladdin Company sent him a letter further suggesting the advantage to building your own home, emphasizing the family nature, the cost, and the advantages over home ownership over renting. Consequentially, Mr. Hawley wrote back to Aladdin informing the company of the style and model of the house he wished to buy, including specifications he sketched himself. Customers often made suggestion of the house design they actually wanted and the Aladdin architects often adapted pre-existing designs to suit customers needs, thus providing a true 'custom built' pre-manufactured home.

Visiting The Factory in Bay City
Locals within the Bay City area had the opportunity to visit the Aladdin factory and meet with the owners, Otto and William Sovereign. However, as most their customers lived outside of Michigan, most communication, as in the case of Mr. Hawley, was done by letter. This allowed Aladdin to sell houses not only nationally but internationally as well.

Order Forms
An order form was included in each catalog, along with a recent price list. With price being a major issue quantities for that house were specifically calculated including needed amounts of lumber and hardware. The order form shows most of the details that Mr. Hawley and Aladdin wished to include in his package. Each customer was given several different options which permitted them to design their own home to their specifications. Mr. Hawley chose the 1949 model of the Winston #5, and the order form allowed him the choice of woodwork color, roof shingles, wallboard, shutters and his own personal specifications for the house. As the order form shows, he requested green shingles, white trim on the exterior, inside trim of a cool green #518, and a floor finished in oil and varnish.

Blueprints and Plans
The deposit plans were intended for use by the customer's local building department in issuing a building permit. Aladdin promised that their construction standards met every building code in America and that "nothing was left to chance." The blueprints and construction drawings were easy and simple to follow. The manual gave direct instructions on how to erect an Aladdin home, and a check list covered all the materials shipped; as the company promised "we check it in, you check it out." In the case of Mr. Hawley and others with special requests, the blueprints and plans were often custom designed. 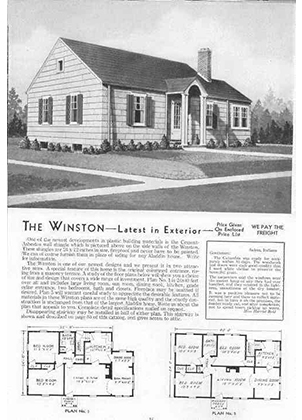 Construction
The construction of the Winston #5 was completed by Mr. Hawley himself in a short time. While most Aladdin houses were constructed by a local builder or handy man, often the customer built or at least helped in the construction of their new home. Materials for the foundations were not included in the package, but the manual did include instructions for creating basements and foundations. Modification Mr. Hawley, like many Aladdin home buyers, wanted to make modifications to the standard plan in order to suit their needs. He chose not to have a chimney and shutters, replaced windows on one of the gable ends with French doors, and added a canopy over the rear door. Internally Mr. Hawley wanted a door instead of an arch leading into the living room. This affected the cost of the house but often additions and subtractions would equal out in the total cost. Many customers returned to Aladdin later for additions such as garages, porches, additional rooms, or folding staircases that turned an attic into a dormer bedroom. 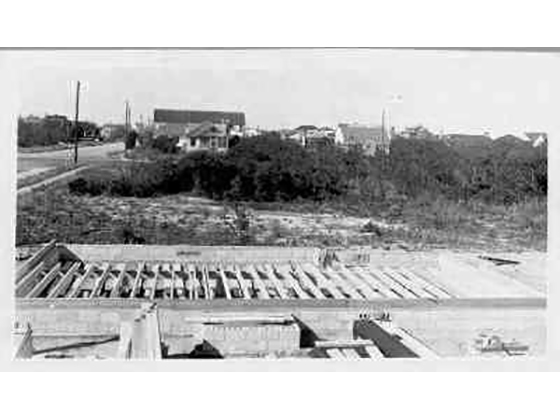 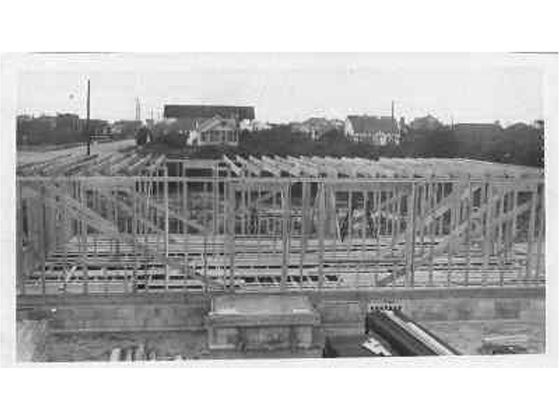 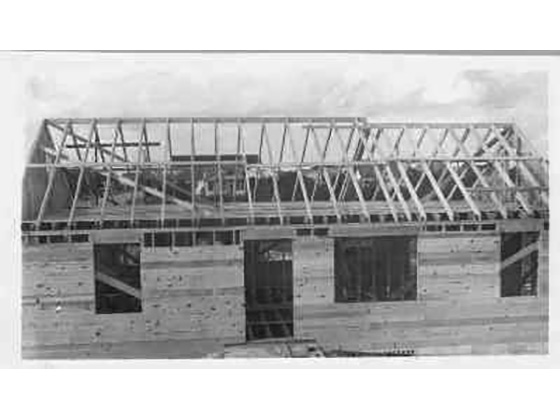 Timber Construction of
Mainframe and Roof 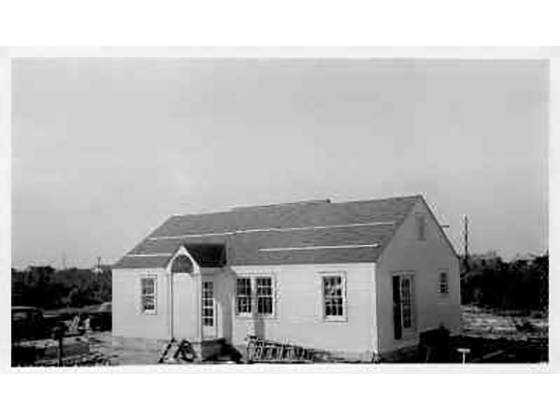 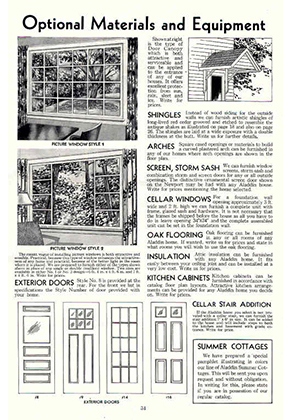 Mr. Hawley, like many Aladdin home buyers, wanted to make modifications to the standard plan in order to suit their needs. He chose not to have a chimney and shutters, replaced windows on one of the gable ends with French doors, and added a canopy over the rear door. Internally Mr. Hawley wanted a door instead of an arch leading into the living room. This affected the cost of the house but often additions and subtractions would equal out in the total cost. Many customers returned to Aladdin later for additions such as garages, porches, additional rooms, or folding staircases that turned an

Furnishings
In 1949 optional furnishings such as kitchen cabinets, oak flooring and screen doors were offered. Aladdin had started diversifying itself in the 1920s by producing many furnishings such as plumbing, kitchen cabinetry, housewares, and furniture. The company attempted to diversify further in the 1960s, but by this time the readi-cut home itself was the primary appeal of the Aladdin Company.

Delivery
Delivery​ for many years had been from the local train stations, but by the 1960s the Aladdin Company was delivering houses with trucks to the plot of land where the foundations had been laid. The cost of freight shipping varied regionally but Aladdin promised that most homes would be delivered within five to eight days of receiving the catalog order. On many of the smaller models in the 1949 catalog Aladdin promised to pay the freight, including that Mr. Hawley's Winston #5.

In addition to individual home sales the Aladdin Company attempted to sell home to corporations and experimented with a number of efforts at diversification.