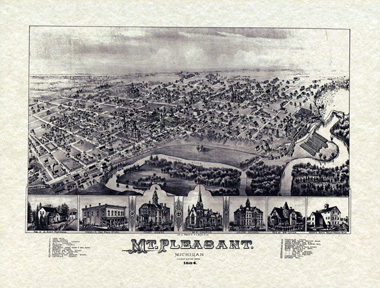 "Nineteenth-century Americans hungered for images of their country," wrote John Reps in his monumental Views and Viewmakers of Urban America. Printed views of cities and towns were among the most popular printed images of the period and a small, specialized industry grew up to meet this demand.

The views were usually, although not always, drawn from a slightly elevated position that allowed for an illusion of depth and the ability to see beyond the facade of a particular street. This elevated view, however, often existed only in the imagination of the artist, and thus, in the era before aircraft, the views were often referred to as being a "bird's-eye" perspective. It is estimated that 2,400 American communities were illustrated in bird's-eye views. The earliest views appeared in the 1830s; the last in the 1920s.

As business enterprises, bird's-eye views were drawn of cities where the viewmakers believed there would be a sufficient market for the view to make the activity profitable. Before the project began, the company contacted the local newspapers and a favorable stream of newspaper coverage was arranged. Shortly after the support of the local newspaper was secured, an announcement appeared in the paper informing the community that an artist would be coming to town to make sketches for a view. After a few weeks, and some additional favorable press, the artist would present the sketches at a public gathering where orders for the printed views would be accepted. A few weeks later, a follow-up story would appear in the paper, announcing that the view was now complete, that it was both accurate and attractive, and that orders could be placed immediately.

At the same time as the artist was working and the newspaper was praising the project, a business agent was calling on community members seeking orders for the view. Businesses were encouraged to purchase multiple copies, and were often rewarded for large orders by having their business prominently drawn and clearly labeled in the finished view. When the project was completed, the agent usually returned to the town to deliver the ordered views, with a few extra copies tucked away to be sold to any who had failed to place on order.

The Clarke Historical Library has gathered together the largest collection of Michigan bird's-eye views in the country. With funding made available from the Library of Michigan, these views, along with additional views housed in the Bentley Historical Library, University of Michigan, the State Archives in Lansing, the Southwest Michigan College Museum, and the History Center of Traverse City, have been scanned. Please note that this project did not include Michigan views previously scanned and made available on the Library of Congress' American Memory Project. To view those views visit the Library of Congress website: http://memory.loc.gov/ammem/pmhtml/panhome.html.

Copies of high-resolution scans of the bird's-eye views (300 dpi or higher resolution) can be purchased in digital form. The charge for each digital image ordered is $11.00. We will post the image to a temporary website and provide you with a link to download it.

To order a digital file please contact us at clarke@cmich.edu (please put "bird's-eye view request" in the subject line of your e-mail) or telephone the library at (989) 774-3352. Please specify the view desired format in which you which the view provided, your telephone number, and USPS mailing address. The Clarke Historical Library does not accept credit card payments.