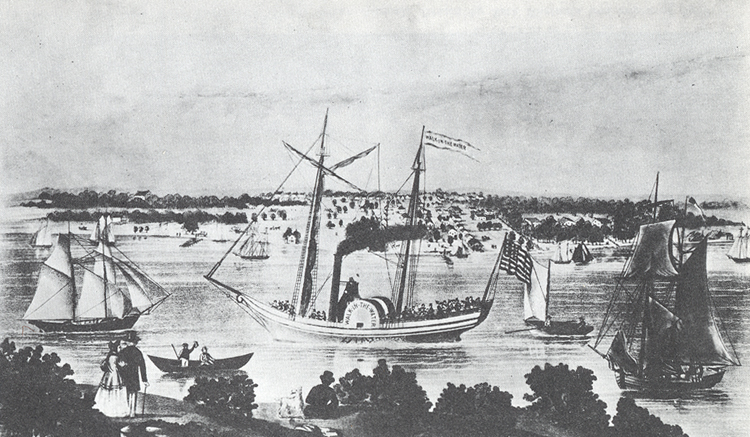 "I Arrived at Detroit..." celebrates the three hundredth anniversary of Detroit's founding by bringing to the Web over one hundred first-hand accounts of individuals who visited Detroit between 1701 and 1837. The individuals who wrote these accounts left a surprisingly detailed and vibrant record of what they saw and experienced. They show that even in this early period Detroit was a most interesting place.

"I Arrived at Detroit..." contains published accounts of Detroit between 1700 and 1837. These accounts were selected and edited with certain criteria in mind. The first criteria was that the account be in the English language either originally or in translation. The length of the accounts was also considered. They vary considerably from a page or so to about 60 pages. Less than a page was usually not worth putting in as the account was of the, "I got off the boat, I found a hotel, I left the next day," variety which adds very little to our understanding of the place. More than 60 pages is an arbitrary cutoff point intended to avoid putting in complete volumes.

If it could be determined that a published account was not a firsthand account or was fiction, it was usually left out of the compilation. An example of a well known account left out because it was not firsthand information is Juliette Kinzie's WauBun, the "Early Day" in the Northwest [NY: Derby & Jackson, 1856] in which her account of Detroit is based on what her mother-in-law told her. An example of fiction left in is Orlando Willcox's Shoepac Recollections: A Way-Side Glimpse of American Life [NY: Bunce & Brother, 1856] which is based on the author's childhood in Detroit. The first chapter of Shoepac Recollections is included for its picture of early Detroit and its citizens. Although Daniel Boone did not write his autobiography, the story of his Indian captivity, during which he was taken to Detroit and ransom for him was refused there, is too interesting to be excluded. Most of the narratives are by travelers but a few residents recollections are included.

There has been no attempt to collect manuscript accounts of Detroit in these years. This would be a worthwhile project, but it is beyond the scope of this project.

The accounts which are included have been edited to only the person's description of Detroit and sometimes of travel to or from the place to give an idea of the travel experience of the time. Some of these accounts were written for a variety of audiences and I have eliminated digressions which have nothing to do with Detroit. In all places where I have edited out material I have inserted three dots (. . .) to indicate this.

Early Midwestern Travel Narratives; An Annotated Bibliography, 1634-1850 by Robert Hubach [Detroit: Wayne State University Press, 1961] was the starting point for collecting these narratives. After consulting all the books on his list which pertained to Detroit, I examined the holdings of the Clarke Historical Library for further and later published accounts. I also examined other bibliographies to find accounts, especially those published after 1961. About 95% of these accounts are in the Clarke Historical Library.

At the beginning of each narrative there is a short introduction giving the name, dates, and brief information about the writer. In many cases there is also a graphic of either the person or the place at the time of their visit. At the end of each account is the bibliographical information about the source of the account. If further information has been discovered about the writer or the event a short bibliography is attached. This bibliography is not exhaustive but is included to give the reader an idea of where more information can be found if they wish to pursue the time, the person, or the event.

These accounts offer an interesting perspective and clearly show how Detroit changed over the years. Obviously visitors are not residents and they give a visitor's perspective. They get things wrong because they did not see everything. Because of this these accounts should not be construed as a complete history of Detroit. But if you want to learn how Detroit was perceived by a wide variety of travelers these account take you back in time. Military men, Indian captives, government officials, adventurers, travel writers, and more arrived at Detroit and left a record of their visit. None of them saw the same place in the same way, even if they were there at the same time and observing the same events. Their various views form a picture of Detroit otherwise difficult to capture.