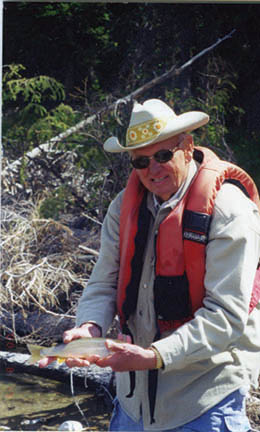 Central Michigan University is pleased to acknowledge the important contributions of Reed Draper and his pouse Joanne Draper in establishing The Reed Draper Collection of Angling Books at the Clarke Historical Library. Reed Draper (1928-2004) was a native Michigander; he was born in Saginaw and received his formal postsecondary education from the University of Michigan and the General Motors Institute. After serving in the U.S. Air Force during the Korean War, Draper opened his first automobile dealership in Bay City. He owned several auto franchises in the Saginaw area and throughout his life was very active in groups and academic programs associated with automotive merchandizing. He was a member of many community organizations and served as President of the Saginaw General Hospital, President of the Saginaw Club, Chairman of the Joint Development Committee of the Saginaw Chamber of Commerce, and Trustee of Northwood Institute.

Reed Draper had a lifelong passion for fly-fishing, particularly fly-fishing for trout. Although he fished all over the world, his favorite stream was the North Branch of the Au Sable River, where he owned a cabin and spent countless hours instructing family and friends in the fine art of fly-fishing. It is clear that he enjoyed sharing his passion with others-perhaps almost more than the pleasure he himself derived from fishing. He also enjoyed fishing in such diverse locales as New England and New Zealand, and he owned a ranch in Wyoming where he fished in the Jackson Hole area.

The Reed Draper Collection of Angling Books began with an idea that became a reality a number of years ago when a Cleveland rare-book dealer notified Central Michigan University that an important collection of angling books was available. A CMU vice president contacted Reed Draper and asked if he might be interested in purchasing the collection on behalf of the university. Ultimately, Draper did just that and donated the library to the Clarke. In the years that followed this donation, he located an additional major angling library that had been owned by Willard Tripp of Bay City. Art Neumann from Saginaw, the longtime owner of a fly-tackle shop named The Wanigas Rod Company, also assisted in this endeavor. It should be noted that Art Neumann was instrumental in founding the national organization Trout Unlimited.

Together Draper and Neumann enabled the acquisition of this second library, and Reed and Joanne Draper eventually donated the collection to the Clarke, where it was combined with the other angling books. The total collection of angling books in the Clarke now comprises almost two thousand books, perhaps the finest such collection in Michigan and even the Midwestern United States.

While the collection contains a particularly strong section of English titles such as Izaak Walton's The Compleat Angler, as well as many fine books with color plates detailing fly-tying and fly-fishing, it is also notable for its many definitive books on American fishing including seminal works about the early history of the sport in Michigan. The collection has much to offer with respect to entomology, ecology, and the principles of stream management. We thank Reed and Joanne Draper for their foresight in connecting Michigan's recreational heritage with this important library. The Reed Draper Collection of Angling Books is a unique addition to the Clarke Historical Library, and we celebrate its presence with the accompanying description and catalog.