The first book to reference fly-fishing was The Treatyse of Fysshynge with an Angle. It was published in 1496 as part of the second edition of The Boke of St. Albans. Some authorities suggest that this work was authored by Dame Juliana Berners, although support for this claim is not definitive.1 The Treatyse was, in part, the first "how to" fishing book, discussing fishing strategies that remain important today: And for the fyrst and pryncipall poynt in anglyng: kepe the euer from the water for the syght of the fysshe, eyther ferre vpon the lande, or els behynde a bushe that the fyshe se you not. For if they doo: they wyll not byte. And looke that ye shadowe not the water as much as ye maye. For it is that thyng that wyll sone fraye the fyshe. And if a fysshe be a frayde: he wyll not byte long after.

But The Treatyse also develops a second theme that has become common in angling literature-the paramount importance of angling as a benefit to one's psychological and physical well being:

Also ye shal not vse this for said crafty disortes for no couetousnes, to the encreasing & sparing of your mony onely, but pryncypally for your solace, & to cause the helth of your body, & specially of your soule.

After it appeared The Treatyse remained the most significant angling book for nearly 160 years, until Izaak Walton's The Compleat Angler was published in 1653. Izaak Walton (1593-1683) spent a large portion of his life as an ironmonger and a hardware merchant in London followed by a productive career as a linen draper. After his first wife died in 1640, Walton left London in 1642, remarried a few years later, and retired from business. He lived much of his life near Winchester, England; after his death he was buried within the walls of the famed Winchester Cathedral.2

Walton authored a number of works, but in 1653 he published what became one of the most widely distributed books in the English language. The Compleat Angler is exceeded only by the Bible and the Complete Works of William Shakespeare in the number of editions that have been produced. The full title of the first edition is The Compleat Angler, or, the Contemplative Man's Recreation. Being a discourse of fish and fishing, not unworthy the perusal of most anglers. Simon Peter said, I go a fishing: and they said, we also will go with thee. John 21:3. This work was printed by Walton's friend T. Maxey for Richard Marriot, in St. Dunstan's Churchyard on Fleet Street in London.

The first edition of the book was so successful that it was followed in 1655 by a second edition containing eight additional chapters and 109 more pages. A third edition appeared in 1661, with a slight variant of the third edition reissued in 1664. A fourth edition was printed in 1668, and the final and fifth edition published during Walton's lifetime was issued in 1676. The 1676 edition is distinctive in that two of Walton's friends, collaborators, and fellow angling authors teamed to produce the final edition. Charles Cotton added a portion titled With Instructions how to Angle for a Trout or Grayling in a Clear Stream, and Colonel Robert Venables wrote a section titled The Experienced Angler. All of these titles were incorporated into a book titled The Universal Angler, Made so, by Three Books of Fishing. Walton was primarily a bait fisherman, and the propitious addition of the work on fly-fishing by his friend Cotton added considerably to the scope of the fifth edition.

The Compleat Angler is written as a dialogue among three sportsmen: a fisherman named Piscator (who is Walton), a huntsman named Venator, and a fowler named Auceps. They walk and fish the River Lea beginning on the first of May. After each person articulates the values inherent in his respective sport, Piscator convinces Venator to learn the art of angling and to become his pupil. After Venator enthusiastically adopts the role of scholar, the remaining chapters of the book-labeled as days in some editions of The Angler-focus on the lessons of angling and of life to be taught by Piscator to Venator.

The Contemplative Man's Recreation talks about nature, beauty, religion, and escape from work in the pastoral setting of the English countryside. Venator has come to the master to learn how to fish, and Piscator does not fail him.
In Walton's day, an angler used tackle consisting of strands of horsehair connected to long wooden rods comprised of ash and hazelwood with pins serving as hooks. As he was primarily a bait fisherman, Walton provides detailed instructions on many aspects of this angling technique. Walton's description of coloring a fishing line provides evidence about how carefully Piscator instructs Venator:

And for dying of your hairs do it thus:

Take a pint of strong Ale, half a pound of soot, and a little quantity of the juice of Walnut-tree leaves, and an equal quantity of Allome, put these together into a pot, or pan, or pipkin, and boil them half an hour, and having so done, let it cool, and being cold, put your hair into it, and there let it lie; it will turn your hair to be a kind of water or glass colour, or greenish, and the longer you let it lie, the deeper coloured it will be; you might be taught to make many other colours, but it is to little purpose; for doubtlesse the water or glass-coloured hair is the most choice and most useful for an Angler; but let it not be too green.

How should one approach a particular species of fish? There are separate chapters on the "Observations" of trout, grayling, salmon, pike, and pearch, as well as other species such as carp, bram, tench, eele, barbel, gudgion, roach, dace, loach, and bull-head. Walton borrowed liberally from the work of other authors of the period, including a section on the construction and use of artificial flies, even though it is unlikely that Walton fished extensively with them. He identifies twelve different flies as being excellent in enticing trout. All things considered, Walton explains that angling does not come easily:

PISCATOR. O Sir, doubt not but that Angling is an Art, and an Art worth your learning: the Question is rather whether you be capable of learning it? for Angling is somewhat like Poetry, men are to be born so: I mean, with inclinations to it, though both may be heightned by practice and experience: but he that hopes to be a good Angler must not onely bring an inquiring, searching, observing wit, but he must bring a large measure of hope and patience, and a love and propensity to the Art it self; but having once got and practis'd it, then doubt not but Angling will prove to be so pleasant, that it will prove like Vertue, a reward to it self.

As has already been noted, The Compleat Angler is far more than a "how to" manual for the everyday fisherman. It is also about approaching life through contemplation and meditation and harmonizing oneself with nature and God: 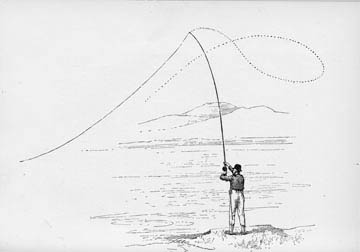 No life, my honest Scholar, no life so happy and so pleasant, as the life of a well governed Angler; for when the Lawyer is swallowed up with business, and the Statesman is preventing or contriving plots, then we sit on Cowslip-banks, hear the birds sing, and possesse ourselves in as much quietnesse as these silent silver streams, which we now see glide so quietly by us. Indeed my good Scholar, we may say of Angling, as Dr. Boteler said of Strawberries; Doubtlesse God could have made a better berry, but doubtlesse God never did: And so (if I might be Judge) God never did make a more calm, quiet, innocent recreation than Angling.

It is altogether fitting that the foundation of the Reed Draper Collection of Angling Books is made up of a superlative compilation of many editions of The Compleat Angler by Izaak Walton. A preeminent nineteenth-century bibliography of English angling books published by Thomas Westwood and Thomas Satchell in 1883 and titled Bibliotheca Piscatoria: A Catalogue of Books on Angling, the Fisheries and Fish Culture, provided an early analysis of the edition complexities associated with this title. Westwood and Satchell counted 89 distinct editions of The Complete Angler 3 published through 1882. Although many of these editions are obscure, rarely seen volumes, the Reed Draper Collection has 70 of the books catalogued by Westwood and Satchell and even contains numerous pre-1882 volumes not found in their exhaustive research compilation. While modern bibliographies have now identified more than 400 different editions of The Compleat Angler that take us through the twentieth century, the Reed Draper Collection has more than 180 editions of this work and closely related books, and, as such, represents one of the most outstanding Waltonian libraries in the country.

Space limits our ability to detail here the extent of the Walton portion of the Reed Draper Collection of Angling Books. However, we will note that of the numerous extant editions, the collection contains many first editions of The Compleat Angler with different named editors and publishers.4 The collection does not contain any of the first five editions of The Compleat Angler; which were published during Walton's lifetime. As one might expect, these volumes are exceedingly rare. In October 2001, a fine copy- "finest in existence"-of the first edition of Walton's book sold at Christie's Auction House in New York for $226,000. This represents a substantial increase from its original cost of 18 pence when it was first published in May of 1653.

An important, but later, Walton edition in the collection was edited by Reverend George Bethune. In 1847 Bethune produced the first American edition of The Compleat Angler and added to it a "Bibliographical Preface" of eighty-four pages wherein he surveyed much of the known history of angling and angling literature. His successful firest edition was followed by a second in 1848. The Draper Collection holds copies of an 1852 third edition, which was followed by later editions in 1859, 1866, 1880, and 1891. It is interesting that Bethune initially used the pseudonym "The American Editor" to publish this work.

The combination of techniques and personal values expressed in The Compleat Angler is representative of the qualities that we see in the other books that contribute to the richness of the Reed Draper Collection of Angling Books. There are many books on fishing strategies, there are exquisite volumes containing prints of beautiful and deceiving artificial flies, and there are numerous works detailing many and varied sport fish. But most of all one finds in the angling-book collection continuing references to the reasons why fishing is a gentle and contemplative art.

1 The Draper Collection houses several reprint editions of this work; the earliest dated version having been printed in 1875.

2 Regarding his name, Walton used the spelling "Isaac" for much of his life, although "Izaak" became the literary spelling.

3 Many of those who edited Walton's classic work chose to modernize the spelling of "compleat." For the purposes of this work we have accepted whichever spelling of the word a particular editor used.