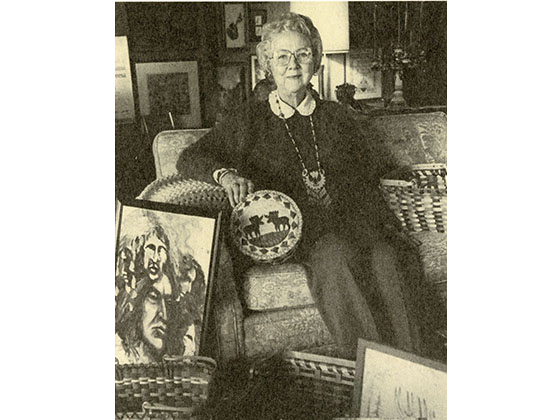 The artistic traditions of the Anishinabe, the Native peoples of Michigan, and the surrounding region reach back in prehistory and embrace a multitude of materials. Art continues to be an important aspect of the contemporary life of these communities. The Olga Denison Collection of Anishinabe art largely represents the contemporary expression of many traditional native crafts.

The collection's origins began in 1962 when the Mount Pleasant Women's Club founded the Mae Beck Indian Affairs Committee to support education among Indian youth. Among those supported were several young, Native American artists. Typical of such committees, an annual event was held to fund the organization's work. The event was a spring card party, but to brighten the tables the young artists whom the committee had assisted were invited to display their work. Soon enough, the work of Native American artists was being purchased and the activity evolved into a combined charity event and annual craft show.

Olga Denison was an original member of the Mae Beck committee and remained active in it throughout her long life. Shortly after the committee's founding, she began to purchase art from local Native Americans both at the card party and on other occasions. What began as an occasional purchase developed into both a series of lifelong friendships and a lifelong interest in collecting contemporary Anishinabe art. The result is a body of material of unusual breadth and scope.

In the latter years of her life, Ms. Denison lent much of her collection of Anishinabe art for display at Central Michigan University. In 2006 a major exhibition of the Denison collection occurred on the CMU campus, which displayed much but not all, of the collection. This web exhibit is built upon the 2006 Denison exhibit.

Ms. Denison died shortly after the exhibit opened. Under the terms of a previously signed agreement, the Denison collection has become the property of CMU and, as a result of Ms. Denison's generosity, part of the cultural patrimony of the people of Michigan.