The Libraries of Central Michigan University: 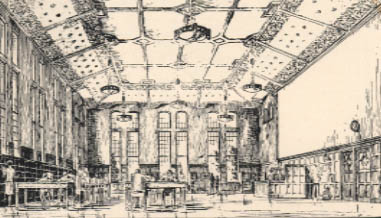 From its founding, Central Michigan University has recognized the need for a library. Faculty and administration realized the need for a resource center where students could gather information regarding a topic. Faculty and administration also realized that students often needed a quiet place to study. Finally the administration and faculty, sometimes grudgingly, acknowledged that the library also served as a congenial place to meet new friends or renew old acquaintances. To create a place to seek information, to establish quiet study space, and for its ability to create a community among students, a library was critical to the university. 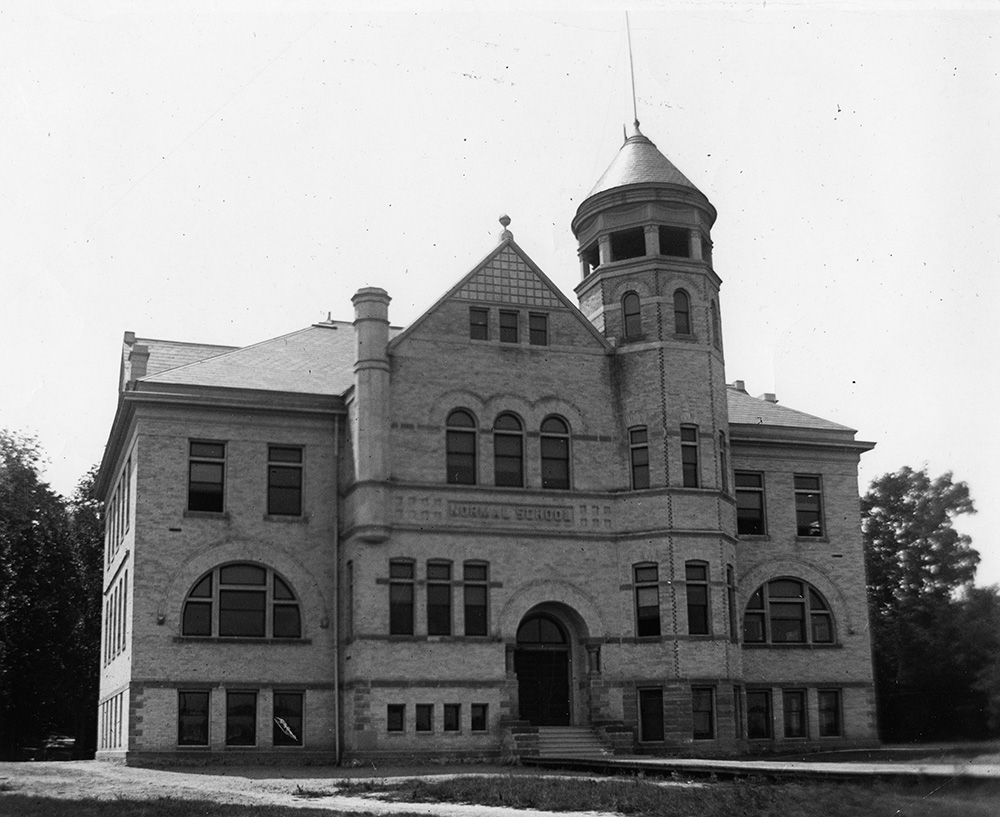 In 1893, when the university first occupied a building on what is today the CMU campus, until 1925 the library was located in "Old Main." Old Main was the first building constructed on campus. Over the years, Old Main was expanded and renovated many times, with the library usually being located in the building's basement. Despite these expansions, the library's collection consistently grew faster than the space available in Old Main. Years of discussion about "the library problem" had led the university to consider seriously building a separate library building. By 1925, plans were well advanced and an architectural rendering of what the new building might look like had been commissioned.

Discussion about a new library, however, took on a sudden urgency on December 7, 1925, when Old Main burned to the ground. The fire destroyed both the building and the library's collection. The only library books left on campus were those that had been checked out by students or faculty in the days prior to the fire.

Apparently, the disastrous fire led the administration to concentrate all available funds on constructing Old Main's replacement, Warriner Hall (originally named the "Administration Building"). Warriner Hall's east wing was given over to the library. The two-story reading room could accommodate 250 students, almost half of the 600 students enrolled in 1933, and 10,000 volumes. An adjoining room housed additional books. Considered a showcase when it opened, the new library was used for both academic and social purposes. In the fall of 1933, for example, a faculty reception for students, featuring refreshments and a dance band, was held in the library reading room. 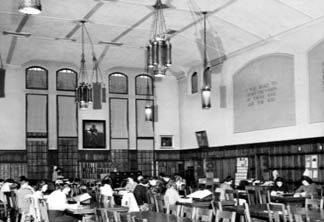 Despite the pride of the campus community in the new library, as early as 1933, "the librarian" was expressing concern regarding the lack of space for the books. When the Warriner library had opened in 1928, it counted 18,000 volumes. By 1933, the printed collection had grown to 30,000 items. The college was becoming too large and diverse to house both the library and administrative activities under one roof. The need for more study space and larger stack areas to house books and other material continued. At the end of World War II, in 1945, when a grateful US Congress voted extraordinarily liberal educational benefits to the almost 11,000,000 veterans of the War, CMU's student population soared and pressure on the library to house sufficient material and enough chairs for students became overwhelming. By the fall of 1952, the 2,100 students enrolled on campus complained loudly about the shortcomings of the "echo chamber," as they had dubbed the Warriner Library. It's remaining 200 student seats -- new book stacks had replaced the other fifty chairs that had been in the library when it had opened -- was woefully inadequate. At the same time, university officials had begun negotiations with Dr. Norman Clarke, Sr. regarding the
donation of his considerable collection of rare books. As 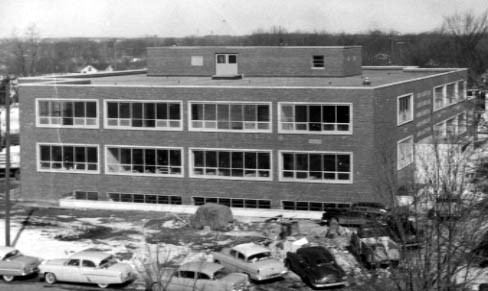 part of the negotiations, Dr. Clarke asked for the creation of a second, "special" library on campus that would have a narrow focus and a significant collection of rare books. In the early 1950s, plans were again drawn up for a separate library building to house both the general library and potentially a second, special library to be founded by a gift from Dr. Clarke. The "new" libraries building, today's Ronan Hall, opened to students in February 1956. It housed both the University Library and the Clarke Historical Library under one roof.

The million-dollar library of 1956 encompassed about 60,000 square feet of space. It vastly increased available seating, offering 750 study seats. The now 90,000 volume book collection fit comfortably into the building with space to spare for several amenities. The library offered seminar rooms, sound-proofed "record" listening rooms, a student lounge, and the latest in technology -- publicly available manual typewriters for student use. Although the building seemed to solve the need for a new library, within a decade the building would prove too small. 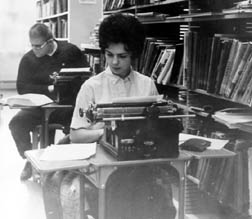 The increase in the number of students, which had begun in 1945, continued throughout the next several decades. By the mid-1960s, the once seemingly spacious 750 student seats available in the library had grown as inadequate for the now 8,200 students as Warriner's "echo chamber" had been in the early 1950s. Indeed, in the fall of 1965, there were more freshman enrolled than the total number of students in 1952. The over 170,000 items housed in the library were once again beginning to crowd out other functions. To meet the needs of the increased number of students and the ever-expanding collection of material, once again plans were drawn up for a new library.That new building, the current Park Library, was opened to students in 1969. The 173,500 square foot structure was about three times as large as the former library and cost $4.2 million to erect. It featured 2,285 seats for study, and an extensive quantity of marble brought from Indiana. 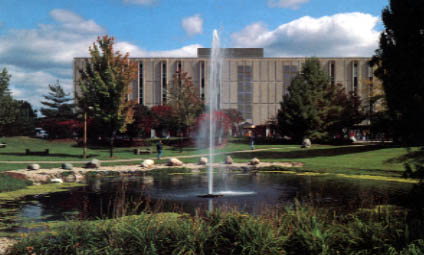 In some ways the "new" library was tied to its predecessors by a series of unbroken links. The manual typewriters first installed in Ronan were brought into the Park Library. Similarly, the emphasis on physical holdings that began with the earliest library on campus continued. The number of books in the library was taken to be a good measure of the overall importance of the collection. Although on the surface little had changed, just below the surface a revolution was beginning that would utterly change the way the libraries and students did business.

That revolution was based on technology. Photocopying technology was among the first installed in the Library. Although a photocopier had been placed in the library in the early 1960s, it was used primarily by staff rather than students. Slowly, additional copiers were brought into the library. In 1970, self-serve, coin-activated photocopiers first became available for student use. Clearly delineated photocopy machines designed exclusively for students were not introduced until 1977. By 1982-83, students, who only twenty years early had hand-written notes for everything they needed, made an astounding one million pages of photocopies. Photocopying technology had completely changed how students "take notes."

If photocopies revolutionized the note taking process in the library, electronic access to information represented an even greater change. Students and faculty were first introduced to the possibilities of on-line searching in 1977, when the library gained access to a number of computerized databases. Initially, however, access to such sophisticated tools was very limited. Library staff, rather than library users, conducted the searches and according to a contemporary document, "the requestor should prepare a detailed statement, describing the topic to be searched." The requestor was also expected to pay for this expensive new searching technology; the rate being $10 per search plus $3 for each fifty citations, which were printed and given to the researcher. Given the difficulty of using the databases and the cost to the patron, use remained low. As late as 1983-84, less than two hundred such searches were performed per year. The possibility that the access to databases would eventually be unmediated and without charge seemed remote. 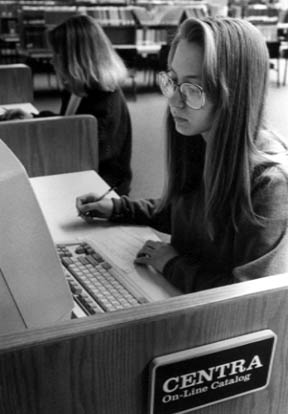 In approximately 1984, the library purchased its first microcomputer, a Radio Shack TRS 80 model II. In 1990, the Libraries implemented what was, from the user's viewpoint, one of the most obvious and significant technological changes -- a computerized, online catalog. Replacing the traditional book catalog that used three-inch by five-inch paper cards to record information about books, CENTRA originally represented 1.7 million records of various types, or four gigabytes of information, that was accessible through approximately fifty terminals in the library. CENTRA, computerized databases, and an increasing body of resource material available on-line has radically transformed how students learn about material and retrieve it for their use.

While these changes could not have been foreseen thirty years ago, even in the 1960s, administrators realized that the Park Library was a work in progress, not a structure to serve the ages. It would someday need to be enlarged. In the Libraries Annual Report of 1965-1966, Orville Eaton, then planning the Park Library, noted that, "I am convinced that we shall be praised a generation from now for planning a building that can be expanded. It is a certainty that the new library will have to be expanded." In the early 1990s, Eaton's words became a reality. Planning began to enlarge significantly the Park Library, as well as to renovate the existing structure to meet technological and other demands undreamed of in the 1960s. These plans served as the basis for the addition to and renovation of the Park Library at the turn of the twenty-first century.