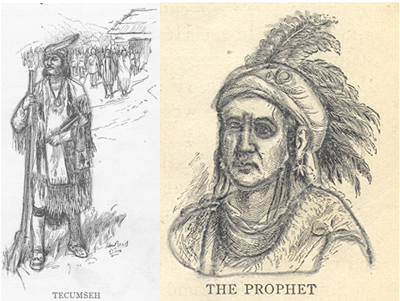 This section is composed of a large number of primary sources, such as speeches made by Native Americans and letters of British and American military commanders, as well as several secondary sources. Documents relate to the alliances created and destroyed by the conflict, the involvement of Indians in battles and military movements, and the relationship between the war and the religious revitalization/revolt that was led by Tecumseh and his brother, the Shawnee Prophet.

An 1834 retelling of events that transpired in August 1812 in Monroe County, Michigan, during the war of 1812.

Several accounts of the Indians' actions against the Americans during the War of 1812, including the Battle of River Raisin and the death of Tecumseh.

Account of armed conflict in 1814 which took place between white settlers under General Cass and Ojibwe Indians under Chief Kish-kaw-ko.

Claus describes the alliance of the various nations to the British and Americans. Also briefly discusses maple sugar production and gift-giving.

Hull's speech to Ojibwe and Odawa nations at Michilimackinac is both a pledge of friendship and a warning not to become allies of the British or the Shawnee Prophet, Tenskwatawa.

Eustis encourages the Indians to form a council to establish the specific proportion of goods and money each part of their tribe should receive from the government. Also, he warns them that all those who ally themselves to "the Pottawatomie who calls himself a prophet" will be destroyed.


Memorial from Michigan demanding extra troops to defend the territory against the Indians.


Elliot describes one battle in which various Indians under "the prophet's brother" fought against the Americans. Includes numbers lost on each side.


Hull assures Canadian citizens he will respect their property if they stay neutral. Also warns that no whites fighting alongside Indians will be taken, prisoner.

Report describing which Indians fought under Dixon in the capitulation of the fort in 1812.


Reports on a council of Odawa, Ojibwe, Potawatomi , Wyandot, Delaware, Muncie, Kickapoo, Sauk, and Iroquois. All vow to remain neutral and convince other nations to leave the British. The Crane, Walkinthewater, Blackhoof are chiefs supporting the US; only Tecumseh and Marpot are still with the British.

Report of the loss of Michilimackinac to the British including 1000 northern Indians.


Hull is worried about the fall of Michilimackinac, and fears that 2000 "savages" will fall on Detroit.


Brock, commander of the British at Malden, demands the surrender of Detroit. He warns that he will not be able to control the Indians in his command once the fighting starts.


Hull explains to the Secretary of War why he surrendered Detroit without a shot. He says that all "loyal" Indians had joined the British, including Tecumseh, Marpot, Logan, Walkinthewater, and Split Log.


Discusses the dreams of "Indian Conjurors" in regards to battles to be fought in the future.


Chief Justice Woodward describes the attack and provides specifics on those who survived and those who were killed.


Explains the excellent character of Robert Dickson as well as his strong influence with the Indians.


Dickson provides the British government with a list of expenses he incurred while persuading Indian nations not to ally with the Americans.


US Indian Agent urges the Winnebagoes and other Indians to remain loyal to the US.


British citizens suggest that Dickson be given a commission to promote peace between Britain and the Indian nations which have great respect for him.

Dickson lists the items and actions that will be necessary to secure the loyalty of various Indian nations.


Letters which describe Captain Dickson's expenses in dealing with Native Americans in 1813.


Account of Battle of River Raisin (January 19-23, 1813) between British with their Indian allies and the Americans written by an American survivor. When the Americans surrendered, they left behind eighty wounded soldiers, most of which were killed by the Indians. Writer was taken prisoner instead and sold to the British in Detroit.

Discusses the quality and quantity of their Indian allies' firearms.


Dickson describes the problems that the American armies had caused to the western Indian nations.


A series of letters that discuss the movements and changing sizes of Dickson's Indian armies.


McArthur is US Brigadier General, Armstrong is US Secretary of War. Reports that Odawa, Ojibwe, Potawatomi , Miami, and Kickapoo have all pressed for peace. He informed them that they would have to go to war against the British and leave their family members as hostages.


Report on the state of affairs in Detroit, saying that the British were encouraging the Indians to commit depredations against the Americans. Also a report on the death of Tecumseh.


Harrison writes to Major General Vincent, commander of the British forces at Burlington Heights, complaining of three massacres committed by Indians allied with the British.


An outsider's view of the British method of maintaining the loyalty of the Indians. He thinks that the Indians who profess loyalty to the US are lying. He also requests money to pay for more interpreters.

Discussion of the state of Indian affairs. Reports that they are restless, that the British are trying to convince them to stay at war, and that the US should attempt to befriend them with a treaty.


Hull's version of the events that transpired before he surrendered Detroit. Includes his reasoning for surrendering relating to the possibility of a massacre at the hands of the Indians.


Relates the movements of Robert Dickson and a story about a British/Indian movement on Detroit which was called off because it was found that earlier intelligence had been faulty.

McKay describes the relationships he has fostered with the Indian nations near Prairie du Chien.


Dickson writes from Green Bay, explaining that the number of goods to be used as presents is not sufficient due to the great demand for supplies and the high quantity of goods that had been damaged or ruined. He suggests an attack on St. Louis to stop the Americans from inciting a revolt of Indians in Missouri.


Suggests route by which the Lake Ontario Indians can be moved to territory along the Mississippi River, fears they will think the English are trying to get out of giving them gifts


Urges Bulger to attempt to prevent the Indians from committing depredations against the US because of their anger over the terms of the Treaty of Paris.


Refers to a Sauk attack on the US under Black Hawk, the US desire to build forts in violation of the Treaty of Ghent, the intimidation of the British and Indians at Mackinac, the suspicion that US agents are cheating Indians of their presents, and US charges that the British are prompting the Sauk attacks.


McDonall is worried that the Americans' intention to build forts in violation of the Treaty of Ghent will lead to further war with the Indians.


Deciding if the British ordered the Sauks under Black Hawk to attack the US two days after the Treaty was signed. They decide that the Indians did not know about the peace, that they thought the US agents were lying about it, and that the British had attempted to halt the attack.


Investigating charges against Joseph Cadot of the British Indian Department that he offered money for US scalps and told the Indians that Mackinac would be destroyed by the British. The court finds him not guilty on both charges because he thought the war was still in progress and thought the US was lying about the treaty.