Skip to main content
View All
Buy Tickets! Dr. James Batcheller
All U.S. residents pay in-state tuition rates at Central Michigan University, regardless of the state they live in.
APPLY TO CMU

The CMU Fight Song, Alma Mater, and other songs are available in the PDF below.

The Anishinabe people of the Great Lakes region, including the Ojibwe (Chippewa) Indians, have a rich cultural heritage that we proudly recognize using the Chippewa Name. Ours is a relationship that has grown and transformed over several decades.

The first semi-official nickname used by Central Athletes, the "Dragons," emerged in 1925. A makeshift dragon would wind through the crowd and circle the Homecoming bonfire with red lights and smoke shooting from its gaping mouth. With the change of name to Central Michigan Teachers' College in 1927 came references to the football team as "Fighting Teachers."

Also, in 1927 a drive began to adopt a more official name for the athletic teams that could be used in write-ups and cheers. "Wildcats" was proposed so that the name would "be a brave fighting animal that once roamed the woods of Michigan." Harry Gover then submitted the name "Bearcats" to explain that "it has all the fighting qualities of wildcats and more because no one ever saw a bearcat." The name stuck for 14 years.

In 1942 Central's line coach Lawrence "Doc" Sweeney approached the student council to request that the Chippewa name be adopted. He argued that the Bearcat was too unfamiliar a mascot to provide the kind of atmosphere desired at athletic events, and "the Chippewa name opens up unlimited opportunities for pageantry and showmanship." Excitement for Central's new identity grew quickly. However, many of the newly adopted "traditions" amounted to stereotypical imagery and mockery of Native ceremonies without regard for authenticity or respect even for the name itself. Over time, such practices have deepened understanding and cooperation between the Saginaw Chippewa Indian Tribe and the CMU community. 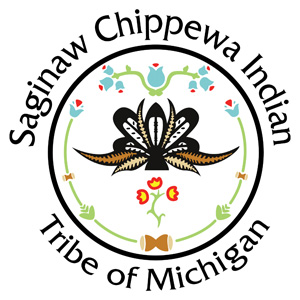 It is the responsibility of every band member to use the Chippewa name well. When we refer to the "Chippewa Spirit," we invoke the goodwill of all who have stood for Central's reputation for sportsmanship and honor and the inspiration offered to us by the Chippewa people. The Anishinabe proverb that states "All Creation Stories Are True" offers a most enlightened and universally tolerant view of all the world's cultures. It is our challenge to live up to that example. 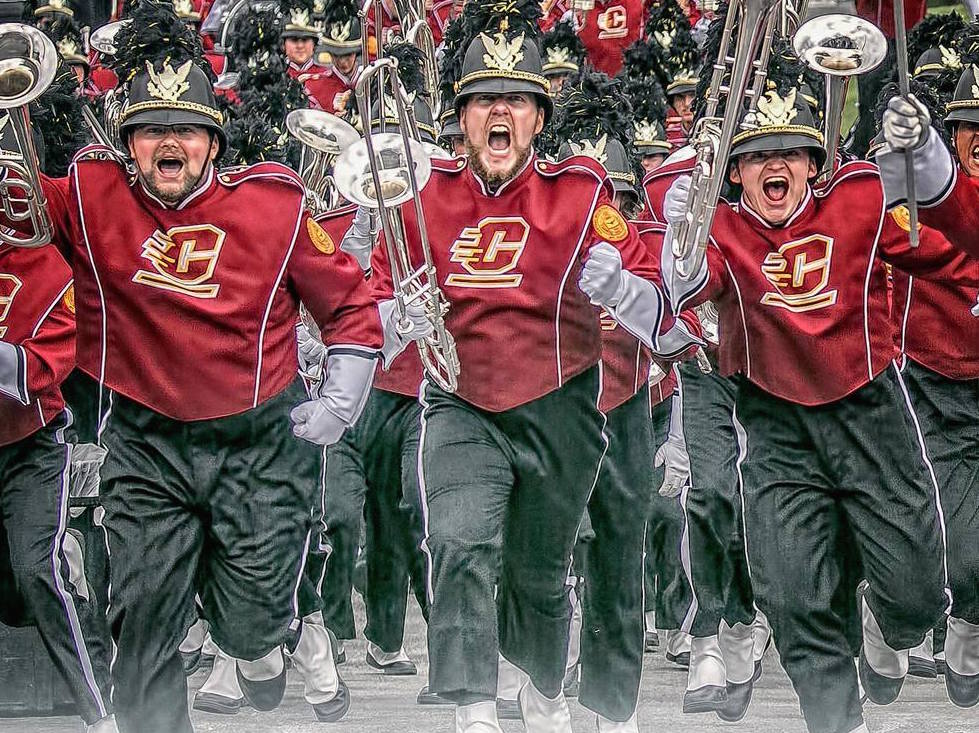 First suggested by band member Jim Dietz in the 1970s, our pre-game entrance signals the beginning of another great Chippewa football contest by filling the stadium with the name itself, loud and clear: CHIP-OO-WAH! 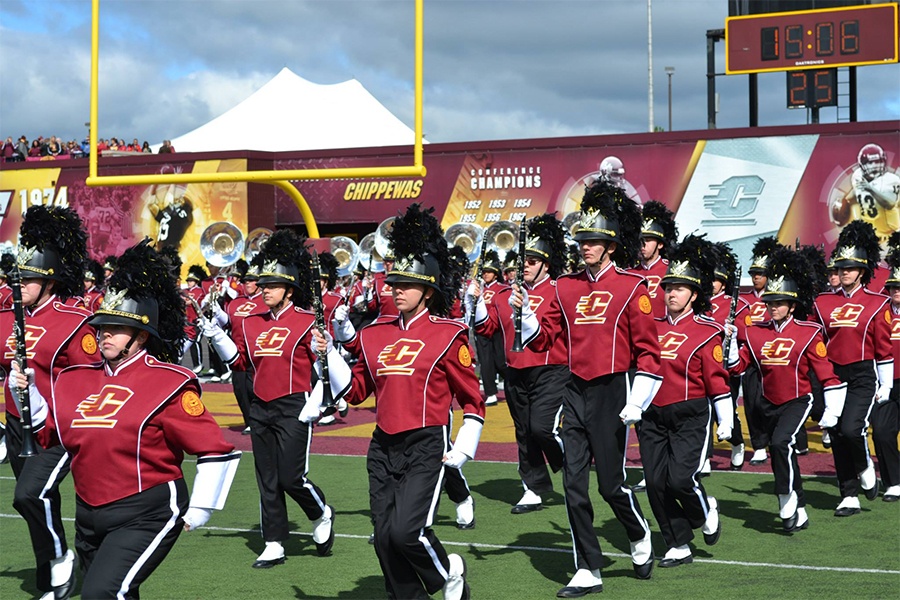 Though some elements have been updated and the order of music had been altered to accommodate stadium changes, the basic format of our traditional pre-game show, with music arranged by Mr. Dietz, has been unchanged since 1960. Die-hard Chippewa fans can recite Bryan Wieferich's familiar script as he introduces "The Most Exciting Band in the Land," and the Alma Mater features hundreds of guest cymbal players at every game.

Spirit in the Stands 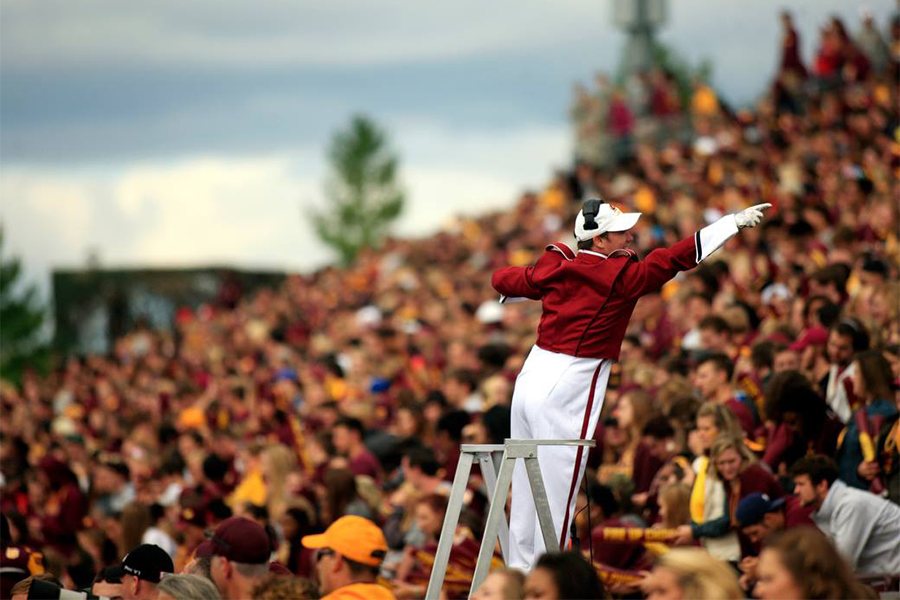 For the Chippewa Marching Band, cultivating a Championship culture is our top job. The band dubbed by the Morning Sun as "The Spirit of the Stadium" stays on its feet, cheering after every single down, no matter what Mother Nature or the other team may throw at us. Positive energy is our business. We never engage the opponents or their fans - we're far too busy cheering on the Chippewa faithful. For that simple reason we receive countless letters and calls in support of our efforts each and every season. By keeping it always positive, we never lose sight of the ultimate goal: PROUD to be a CHIPPEWA!

Begun by Mr. Dietz, we take the last few moments together in silence before entering the public eye on game day. This is our opportunity to focus on the task of raising the Chippewa Spirit to new heights with unfailing energy for the next several hours.

On November 5, 1966, after CMU defeated Eastern Illinois 30-10 on the road in Charleston and as the band marched from the stadium to circle up near our buses, Drum Major Dave Millross had an idea. Seeing a large tree near the buses, Dave broke the band down to single file and led the Marching Chips in a circle around that tree, whereupon CMB 44 charged it and cheered, From that day to this, post game celebrations back here at home have centered on a tree, beginning with a Silver Poplar off the Northeast corner of Powers Hall and continuing to the Bradford Pear we've used for the past couple of decades.

Post game tradition is forever enshrined on Marching Chips Rock, dedicated in 1969, and now placed atop Rose Hill overlooking the Stadium. It is there that we end each game day as we began it - together, whether in triumphant victory or in somber reflection of defeat. In 2016, CMB 94 celebrates the 50th anniversary of that great tradition.

It is appropriate that our rehearsal facilities bear the names of the two men who established the body of our traditions. The Norman C. Dietz Band Hall is large enough to accommodate the entire band inside the School of Music. And, thanks to the support of our friends and alumni, the marching band’s rehearsal field, which was Jack Saunders classroom for over thirty years, is now named after him.

Used by Preston Mayhew when he was director of the CMB, this antique baton has been passed on to each new director since, from Mr. Dietz to Jack Saunders, to Dr. Batcheller. The baton is brought out only on special occasions and for alumni events. 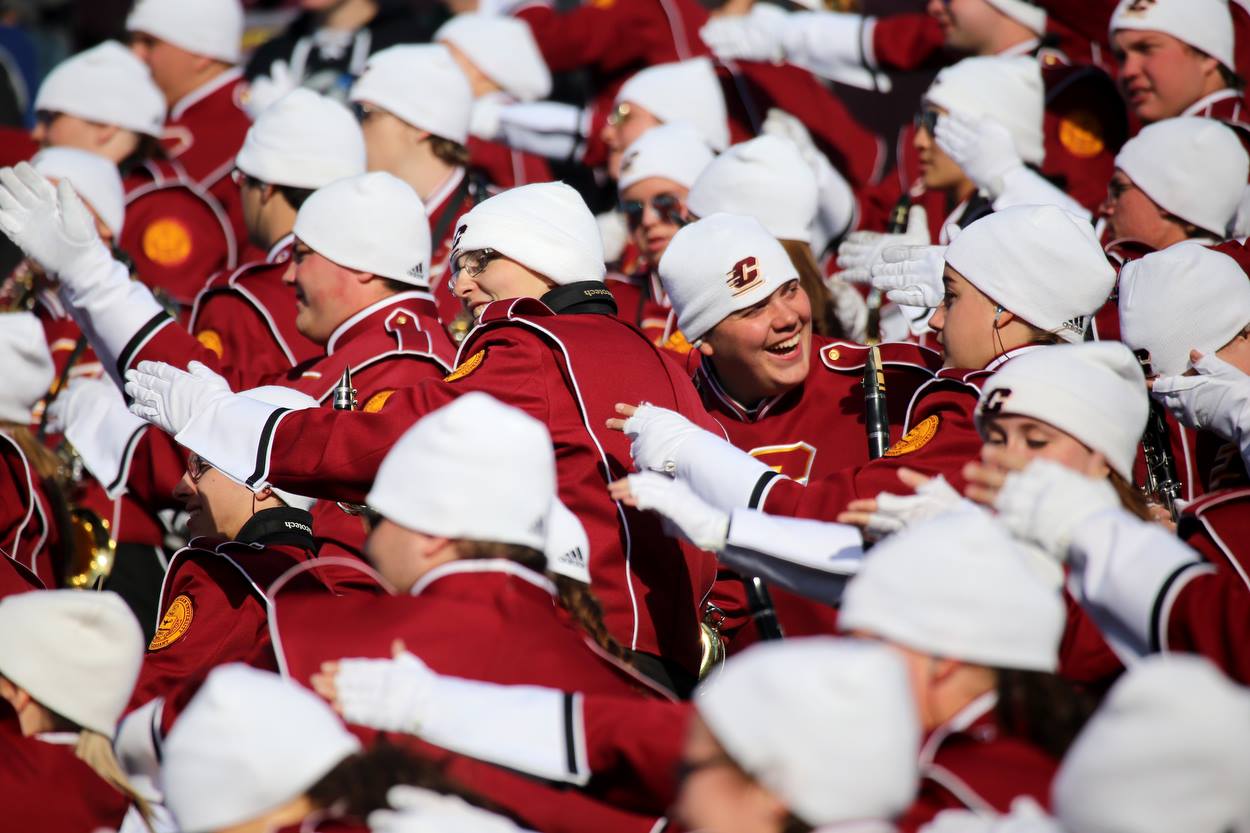 Go! Over the years one basic tenet has been held high above all other traditions: that each day we try to be the best we've ever been. Never satisfied with even our most excellent performance, we make it our goal that each rehearsal, each performance, each season is better than the last. Simply put, Semper Superne Nitens – Always Striving Upward. Furthermore, we work together, in concord (the opposite of discord) to reach the height of excellence: Concordia Ad Astra – Together to the Stars. Living our motto every day positions us in reach of our common purpose: Play with the Heart of a True Champion