Meet the cadre and staff from the Department of Military Science and Leadership at Central Michigan University. 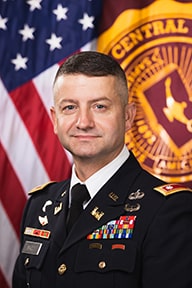 LTC Bacon has served in a variety of assignments from Platoon to Corps levels. He spent his Lieutenant assignments in the 44th Engineer Battalion (Combat) at Camp Howze, Korea and the 41st Engineer Battalion (Combat)(Light) at Fort Drum, NY. As a platoon leader, he deployed to Bagram, Afghanistan in support of Operation Enduring Freedom (OEF) serving as a platoon leader for a Mine Clearing Unit. As a Captain, he served in the 37th Engineer Battalion (Combat)(Airborne), Fort Bragg, NC as an Assistant Battalion Operations Officer and Battle Captain where he deployed to Forward Operating Base (FOB) Sharana as part of Task Force Eagle in support of OEF with the mission of conducting assured mobility through route clearance, road construction, and FOB construction/security. He then went on to command Bravo Company, and subsequently, selected to command Headquarters and Headquarters Company, each in the 37th Engineer Battalion (Combat)(Airborne). As a Major, he served as an Assistant Professor of Mathematics at the United States Military Academy (USMA), West Point, NY where he taught Mathematical Modeling and Calculus I. Following that assignment, he served as an Operations Officer in the Engineer Section, XVIII Airborne Corps, Fort Bragg, NC where he deployed a third time to Afghanistan in support of OEF serving in Kabul as the Deputy for Engineer Development of the Afghanistan National Security Forces / Afghanistan National Army as part of the International Security Assistance Force (ISAF) Joint Command (IJC). Upon redeployment, he served as the Surge Ready Force Commander, 307th Airborne Engineer Battalion (Rear)(Provisional), 82nd Airborne Division and as the Battalion Operations Officer, 27th Engineer Battalion (Combat)(Airborne) each at Fort Bragg, NC. He was selected for a return assignment in the Mathematics Department at the United States Military Academy where he was the recipient of the BG Jack "Murph" Pollin Award for Teaching Excellence having taught Mathematical Modeling, Calculus I & II, Probability & Statistics, Math for the Social Sciences, and Officership. He most recently served in Wiesbaden, Germany as the Deputy Commander for the Europe District, U.S. Army Corps of Engineers (USACE) overseeing support offices responsible for delivering a $7B military construction program performing projects in 40+ countries across Europe, Africa, and Israel.

LTC Bacon and his wife Julie have been married for over 18 years. Together, they have three children: Christopher, Emily, and Ava. 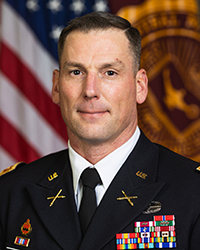 Major Nick Andrychowski was born in Enfield Connecticut. He enlisted in March 2005; graduating BCT from Ft. Sill OK and was assigned to 71st CSB in Bamberg Germany. During this assignment, he deployed in support of Operation Iraqi Freedom (OIF 05-07). Upon return to Germany in 2007, Nick was selected for the Army’s Green to Gold program (ADO). He joined the Minuteman Battalion and graduated from the Westfield State University (UMass ROTC) in 2009 with a Bachelor of Arts Degree in Psychology and was commissioned as a 2nd Lieutenant in the Field Artillery.Upon completion of Field Artillery Officer Basic Course in 2010.

Following completion of Filed Artillery Captains Career Course in May 2013; he then served as Operations Officer, G33, US Army Central (USARCENT) within the Combined Operations Integration Center at Camp Arifijan Kuwait. From 2014-2016, Nick was nominative selection to command Madison Recruiting Company, Milwaukee Recruiting Battalion, 3rd Brigade. From 2016-2019, he served as senior Battery Observer, Coach/Trainer (OC/T) for 3-314 FA, 174th Infantry Brigade, 1st Army at Joint Base McGuire-Dix-Lakehurst NJ. Major Andrychowski was nominatively selected for a second command of HHC 174th Infantry Brigade from May 2019 to July 2020. From 2020-2021, Major Andrychowski served as Senior Artillery Advisor for the Saudi Arabia Ministry of the National Guard under the Office of the Program Manager - Saudi Arabia National Guard (OPM-SANG)

Nick is married to his wife Maisha. 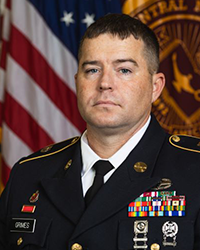 MSG John S. Grimes was born in Jacksonville, Florida. He entered the United States Army on 22 July 2002 and completed One Station Unit Training (OSUT) in November 2002 at Fort Sill, Oklahoma to become a 13B, Cannon Crewman. 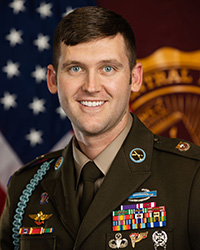 SFC Capen was born in Spooner, Wisconsin. He entered the United States Army on 8 August 2006 and completed One Station Unit Training (OSUT) in November 2006 at Fort Benning, Georgia, to become an 11B, Infantryman.

SFC Capen and his wife Courtney have been married for nine years. They have two beautiful daughters, Mckinleigh and Meredith. 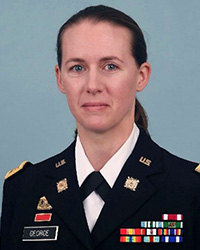 Major Jillyan George, of Flint Township, Michigan, entered the Army in May 2008.  She attended the Quartermaster Basic Officer Leader’s Course and the Mortuary Affairs Officer’s Course at Fort Lee, Virginia.  Her first assignment was the 571st Forward Support Company, Fort Sill, Oklahoma, as the Distribution Platoon Leader.  In July 2010, she deployed to Afghanistan, where she was assigned to the Counterinsurgency Training Center as the Unit S1.  Upon redeployment, she was selected to serve as the Battalion S4 for the 1st Battalion, 17th Field Artillery Regiment, Fort Sill, Oklahoma.

MAJ George accepted a commission with the Oklahoma Army National Guard in 2013, serving as the Executive Officer for the Joint Force Headquarters Command (JFHQ), Oklahoma City, Oklahoma; she served there for two years and was promoted during her tenure.  In 2014, MAJ George relocated to Arlington, Virginia for new civilian employment and transferred to the U.S. Army Reserve (USAR).  Her first assignment was Company Commander of the 55th Sustainment Brigade at Fort Belvoir, Virginia.  In 2017, she transferred to the Military Intelligence Readiness Command (MIRC), Fort Belvoir, Virginia, to serve in the G4 as the Logistics Planner.  In 2019, she relocated to Michigan and transferred to the 645th Regional Support Group (RSG) in Southfield, to serve as the Brigade S4 Officer-in-Charge.  In 2020, she transferred to the 4-413th Senior Reserve Officer Training Corps (SROTC) Battalion, Fort Knox, Kentucky.  She joined Central Michigan University as cadre in 2021, serving as an instructor at Ferris State University and the USAR liaison for the Chippewa Battalion.

MAJ George is the daughter of Lieutenant Colonel (Retired) Joseph George and Mrs. Nancy George of Flint, Michigan and has one sister, Captain (Retired) Jessica George. 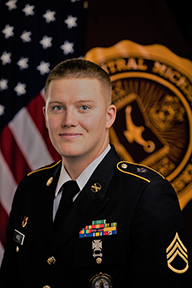 SSG Nicholas King is originally from St. Louis, Michigan, where he joined the Michigan Army National Guard as a 17-year-old Junior at St. Louis High School on 8 February 2011.  He completed his Basic Combat Training at Fort Sill, OK, in the summer between his Junior and Senior year of high school.  After graduating from St. Louis High School, he attended his Advanced Individual Training as a 13B (Cannon Crewmember) back at Fort Sill, OK.  After returning from AIT, SSG King attended Mid-Michigan Community College while serving as a 13B one weekend a month and two weeks each summer.

SSG King served as a 13B (Cannon Crewmember) for six years and was stationed at B Battery 1-119th Field Artillery out of Alma, Michigan. After completing his initial contract, SSG King changed from a 13B to a 12R (Interior Electrician) and was stationed at the 1434th Engineer Company out of Grayling, Michigan. Two years later SSG King transitioned from a 12R to a 79T (Recruiting and Retention NCO). Before coming to CMU on 1 November 2020, SSG King was the Recruiting and Retention NCO out of Alma, Michigan.

In his free time, SSG enjoys renovating houses and spending time with his wife and three children. 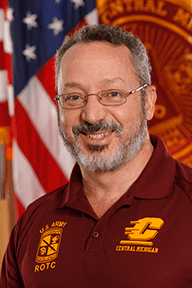 His interests include going to the gym, reading, and spending time with his wife and three daughters. 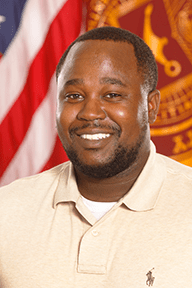 Aaron is originally from Flint, Michigan. He joined the United States Marine Corp on June 15, 2009. He completed recruit training at Marine Corps Recruit Depot in San Diego, California, and graduated on September 11, 2009. Aaron was then sent to Enlisted Warehousing Basic Course in Jacksonville, North Carolina. He was certified as a 3051 Inventory Management Specialist. He served nine years and eight months in the Marine Corps.

Aaron is seeking to complete his Bachelor's degree in East Asian Studies. 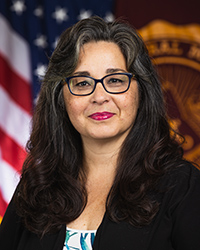 Antoinette is a recent addition to the Military Science team as of June 2021. She has been with CMU over 13 years; in the School of Music, and most recently the Office of Curriculum Support. Having worked both in academia and corporate business, she brings to Military Science/ROTC over 20 years of administrative experience. She holds a master's degree in Music from the University of Illinois, and a bachelor's degree in Music from The Florida State University. She has been married over 30 years to her college sweetheart and has two pretty awesome daughters. 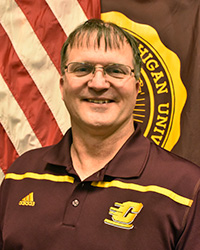 The Chippewa Battalion welcomed Mr. Randy Wright in June 2022 as the Recruiting Operations Officer. Mr. Wright has been, and continues to be a Military Science Instructor at Ferris State University. He brings with him 29 years of active duty service, with leadership positions ranging from Team Leader to Brigade Command Sergeant Major. Mr. Wright has a vast knowledge on the Army and our ROTC program, and will bring on the next generation of leaders.