About the Griffin Endowed Chair 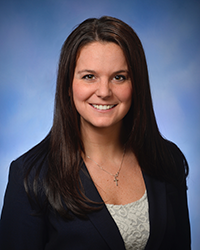 Andrea LaFontaine, executive director of the Michigan Trails and Greenways Alliance, has been named Central Michigan University's next Griffin Endowed Chair in American Government. The Griffin Chair leads the university's efforts to elevate political awareness and activity among students, faculty and citizens.

As chair, LaFontaine will teach two university courses and host community forums on topics related to Michigan government and policies. She replaces David Rutledge, who has held the position since 2017.

LaFontaine has a strong connection to CMU. She completed a bachelor's degree in political science in 2009 and a Master of Public Administration degree in 2011. In 2014, she was recognized as a CMU 10 Within 10 recipient. She also was a student in courses taught by past Griffin Chair Bill Ballenger.

"I remember his class sparking a deeper interest, understanding and awareness for the political and legislative process in Michigan," LaFontaine said. "I also have a deep admiration for the Griffin family.   The Griffin name is synonymous with integrity, and it is an honor to serve in a role associated with Senator Griffin's legacy."

"All of these experiences have shaped and continue to shape my perception and understanding of our democratic process," LaFontaine said.

Responsibilities of the Griffin Endowed Chair

Teach an undergraduate course
The course will focus on current U.S. government policy issues affecting Michigan. It will give students firsthand exposure to complex political issues and feature guest speakers from government and industry.

Conduct a series of political forums
The forums will be of relevance to Michigan, culminating with an annual symposium on Michigan politics. Key experts from government, business, academia and elsewhere will be invited to participate in the forums.

Oversee collection of Michigan political material
The collection will include research, data, campaign memorabilia and much more. These materials will supplement the Clarke Historical Library holdings, which already include 410 boxes of Griffin's U.S. government papers. The long-term goal calls for establishment of a center for Michigan politics, which will serve as a central source for scholarly and public research.

About Robert and Marjorie Griffin

After his Senate terms, Griffin continued his public service on various boards while practicing law privately until 1986 when he was elected to an eight-year term as associate justice of the Michigan Supreme Court.

After graduating from Dearborn's Fordson High School, Griffin began his Central Michigan studies in 1941. His education was interrupted in 1943 by World War II. He earned two battle stars while serving with the 71st Infantry Division of the U.S. Army in the European Theater, returned to Central Michigan in 1946 and graduated in 1947 with a bachelor of science degree. He married Marjorie Jean Anderson the same year.

Griffin earned his juris doctor degree from University of Michigan in 1950 and later was awarded 11 honorary degrees, including a doctor of laws (LL.D.) degree from CMU. He donated his U.S. Congressional papers to Clarke Historical Library at Central Michigan University after he left the Senate.

The valedictorian of Ludington High School, Marjorie Anderson Griffin (1922-2017) attended Central State Teacher's College to become a teacher, graduating in 1944 — once again as valedictorian of her class. She was very active as a Central college student, serving as president of the Association of Women Students and as the first chairman of the Central's Victory Loan Fund for returning veterans.

Griffin taught two years in Greenville, Michigan, before returning to Central Michigan as a faculty member in Park Library. She later served a decade as a member of the Board of Governors of the Clarke Historical Library.