Julien Rossignol's lab is part of the Field Neurosciences Institute Laboratory for Restorative Neurology that he co-directs with Gary L. Dunbar, Ph.D. 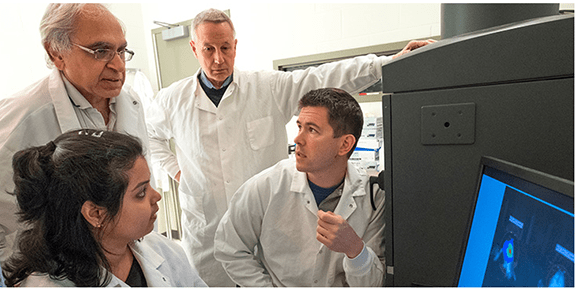 The Field Neurosciences Institute (FNI) Laboratory for Restorative Neurology is part of the Brain Research and Integrative Neuroscience (BRAIN) Center, located on the second floor of the research wing in the Herbert H. and Grace A. Dow College of Health Professions building. The research mission of the FNI Laboratory is to better understand the mechanisms involved in the recovery of function following damage to the central nervous system and to devise strategies to promote these mechanisms in clinically relevant ways. Current research focuses on dendrimer nanomolecule-based delivery of genes and drug delivery devising potential treatments for neurodegenerative diseases, particularly Huntington’s disease (HD), Parkinson’s disease (PD), and Alzheimer’s disease (AD), stroke, and brain tumors such as glioblastoma multiforme (GB).

We use an in-house PAMAM dendrimer nanomolecules with mixed-surface synthesized by our collaborators, Ajit Sharma, Ph.D., and Douglas Swanson, Ph.D., from the Department of Chemistry and Biochemistry. These dendrimers are non-toxic to cells in vitro and in vivo and have the ability to carry large amounts of cargo (drugs and genes/biomolecules). The surface modification that we have done to the conventional amine surface dendrimers enables our dendrimers to be less toxic and yet be uptaken by the cells. We have also shown that these modified dendrimer nanomolecules can cross the blood-brain barrier following their systemic injections into the arteries and veins in mice.

Current research strategy utilizes viral vectors for the transfection of genes. However, these vectors do not have the ability to carry large plasmids that are in the range of 10-100kb. We use our dendrimer nanomolecules to carry large therapeutic plasmids and deliver them to the cells and brain in vitro and in vivo, respectively. This strategy overcomes the issues associated with viral vectors including the safety aspect since these dendrimers are proven to be safe and non-toxic. Stroke is the leading cause of disability and the fourth leading cause of death amongst adults in the United States; yet, effective restorative therapies are lacking. Stem cell transplantation offers an exciting therapeutic approach; however, there is a large variability in efficacy due to survival problems of transplanted cells in the post-stroke environment. An alternative approach would be to convert endogenous cells already proliferating in response to stroke into functional neurons. Reactive astrocytes are cells widely associated with neural injury including stroke. Engineering astrocytes into functional neurons would decrease scarring of the stroke area while at the same time initiating endogenous brain repair. It is possible to trans-differentiate astrocytes into functional neurons by supplying transcription factors, such as SOX2. To achieve this goal we use a novel class of nanomolecules, PAMAM dendrimers, developed by our collaborators here at CMU, to allow non-viral transfection of DNA into neurons and glia at high efficiency in vivo.

Huntington’s disease (HD) is a fatal, late-onset neurodegenerative disorder caused by the degeneration of medium spiny neurons (MSNs) in the striatum. The cause of the disease is a CAG repeat expansion in the Huntingtin gene (HTT) leading to production of mutant huntingtin protein. Currently, the only drugs available are palliative. It is well known that trophic factors such as brain-derived trophic factor (BDNF) are lower in HD brain. Our previous studies have shown that BDNF-based therapy is promising in HD by alleviating the signs and symptoms of the disease. However, BDNF cannot cross the blood-brain barrier per se. Therefore, our strategy involves the use of dendrimer nanomolecules to deliver BDNF plasmid in R6/2 and YAC128 HD mice.

Glioblastoma multiforme (GBM) is one of the most common, but an aggressive form of malignant brain tumor in adults arising from glial cells. The disease can be managed by chemotherapy and/or radiotherapy or the tumor can be surgically removed. However, there is no permanent cure. GBM causes inflammation in the brain due to the up-regulation of pro-inflammatory genes leading to the invasion and migration of cancer. Previously studies have proven the therapeutic/anti-inflammatory effects of Curcumin (Cur) in Glioblastoma. Since Cur is highly insoluble in organic solvents, we have encapsulated and entrapped Cur in dendrimers making them more water soluble to achieve its delivery in significant amounts to the GBM brain (in mice). Our current work also involves using a few more water-soluble formulations of Cur and nanomolecules synthesized by our collaborators for GBM. 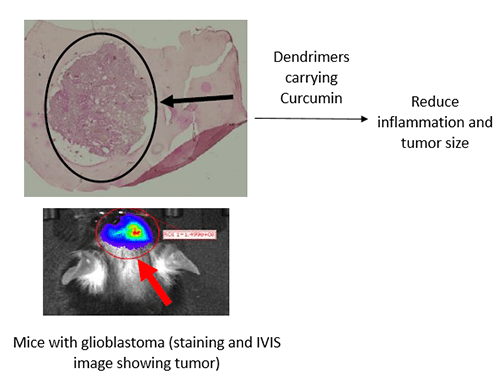 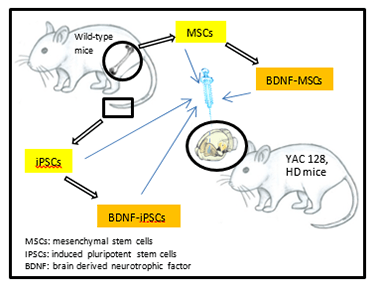 Huntington’s disease (HD) is one of the most debilitating neurological disorders. HD is an autosomal dominant disorder characterized by uncontrolled ballistic movements and by extensive neuronal degeneration, especially of the medium spiny neurons (MSNs) in the striatum. Although it is known that the pathology of HD is the result of a trinucleotide CAG repeat mutation (The Huntington’s Disease Collaborative Research Group, 1993), the mechanisms responsible for the onset of neuronal degeneration and the characteristic motor and cognitive dysfunction have not been elucidated. The only FDA-approved treatment for HD is Tetrabenazine, a drug that depletes monoamine concentrations, but provides only palliative motor benefits and produces adverse side effects which limit its usefulness (Huntington Study Group, 2006). Thus, no current therapies exist that can reduce the constellation of cognitive, motor and psychiatric symptoms, or slow the unrelenting progression of this fatal disorder.

One of the most promising strategies for treating HD has emerged with the advent of cellular therapies. Transplantations of embryonic cells in HD have shown some success, but rejection of these cells and their limited engraftment into the host tissue have mitigated the efficacy of this approach. Although other cell replacement approaches are being developed, transplantation of mesenchymal adult stem cells (MSCs) has gained considerable attention because of their ability to produce and release anti-inflammatory cytokines and neurotrophic factors. Our strategy of transplanting genetically altered MSCs that overexpress a critical neurotrophin, brain-derived neurotrophic factor (BDNF), has been targeted for clinical trials, funded by a $17 million grant from the California Institute of Regenerative Medicine to the University of California, Davis. Although we believe this strategy is currently one of the most promising therapeutic approaches for slowing the relentless progression of HD, we believe that the efficacy of MSCs for treating HD can be further enhanced by co-transplanting them with induced-pluripotent stem cells (iPSCS), when either or both of these cell population are genetically altered to overexpress BDNF. 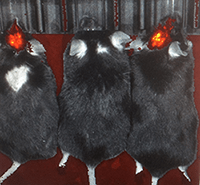 Huntington’s disease (HD) is a devastating, fatal, autosomal dominant, neurodegenerative disorder, characterized by a relentless loss of cognitive and motor function which affects about 1 in 50,000 people, and which has, to date, remained refractory to any cure or treatment strategy. The use of stem cells and gene-editing techniques offer significant promise, but systemically delivering therapeutic biomolecules throughout the body, especially across the blood-brain barrier, remains a significant obstacle in developing an effective treatment. We are working on developing a novel way of delivering drugs or compound into the brain by studying the safety and biodistribution of a novel family of dendrimers to mesenchymal stem cells (MSCs) as a potential means of delivering therapeutic biomolecules.

After the recent discovery that infection with Zika during pregnancy can lead to microcephaly in infants, there has been a huge response from the scientific community to determine the virus’ effect on the developing brain. We have been infecting human and mouse neural stem cells with the virus to understand how these cells respond to the virus. Our previous work with mouse neural stem cells has shown that the cells attempt to combat the virus by increasing the expression of genes important for the production of astrocytes, cells in the brain that are important for combating infection, supporting neurons, and regenerating the nervous system after an injury. Future studies include exploring how the virus affects differentiating neural stem cells, determining the inflammatory response to infection, and whether the virus affects the neuronal firing properties of mature neurons.

We are currently looking for student volunteers who would like to gain valuable laboratory experience and those who would like to complete an honors capstone project and are interested in our ongoing neuroscience research.