Scholarships and Funding in Political Science and Public Administration

Review our scholarships and funding opportunities for students in Political Science and Public Administration.

Established in 2004 by Sarah and Edward Cohen (daughter and son-in-law) and friends of Barbara Greene. Barbara was a professor and chair of the political science department prior to her death in 2001. Income from this endowment will support a scholarship for students enrolled in the political science department who have an interest in state and local government. One scholarship will be awarded. The application deadline is the spring semester.

Questions should be addressed by emailing Dr. Thomas Greitens. 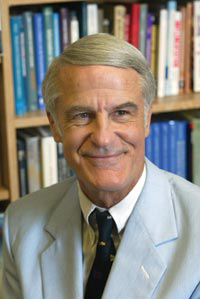 The William S. Ballenger III and Dr. William P. Browne Capitol Internship Program Endowment provides financial support to political science students completing internships within all branches of the state and federal government. The endowment provides students with a stipend for transportation and other expenses related to the internship activities. The endowment was established through private gifts from family and friends, including Ballenger and Bill Browne's wife, Linda. The endowment will continue to increase its support for internship stipends as future gifts are received through ongoing fundraising efforts by the college.

Ballenger served as the Robert and Marjorie Griffin Endowed Chair in American Government at CMU from 2003-07. He is a former state representative and senator, director of the State Department of Licensing and Regulation, and a former state racing commissioner. He also served as deputy assistant secretary of the U.S. Department of Health, Education, and Welfare in President Gerald R. Ford's administration.

Browne taught political science at CMU for more than 30 years until he passed away in 2005 after a 12-year battle with chronic myelogenous leukemia. He was instrumental in establishing the master of public administration program and in placing political science students in internships throughout the country. The Ballenger-Browne endowment was designed to support and enhance the internship placement efforts that Browne helped to establish.

Applicants should submit a statement of interest and transcripts to the School of Politics, Society, Justice and Public Service by emailing Dr. Emma Powell. Established in 2018 by Dr. David Jesuit and friends of Maxine Berman, the Maxine Berman Academic Achievement Award recognizes the academic accomplishments and promise of a student enrolled in one or both of the seminar courses taught by the Griffin Chair (PSC 300/301). Berman was an American politician who served on the Michigan House of Representatives between 1983 and 1996. She served as the Robert and Marjorie Griffin Endowed Chair in American Government at Central Michigan University from 2009-2013. She died at the age of 71 on March 2, 2018, of lung cancer, in West Bloomfield, Michigan.

This is a non-renewable annual scholarship for a sophomore, junior, or senior maintaining a cumulative minimum GPA of 3.0 with preference given toward first-generation college students.

For more information, email the School of Politics, Society, Justice and Public Service.

The scholarship was established to commemorate the 50th anniversary of the formerly named Department of Sociology, Anthropology and Social Work and to support international endeavors by students majoring in sociology, anthropology or social work (SASW).

Each year the School of Politics, Society, Justice and Public Service awards a limited number of assistantships to MPA students. This primary form of financial assistance for graduate students provides tuition remission, a stipend, and funding to cover the cost of mandatory university fees. They work 20 hours per week for the department assisting in faculty research and teaching activities.  For additional information, please email SPSJPS@cmich.edu.

An international experience is an invaluable part of a student's education and will provide an international perspective which cannot be fully recreated within the classroom. To promote international study, the School of Politics, Society, Justice and Public Service has created a small fund to assist students with costs related to study abroad.

Award Amount: Awards are limited to no more than $100 and are dependent upon the amount of funding available.

Award Amount: Awards are limited to no more than $100 and are dependent upon the amount of funding available.