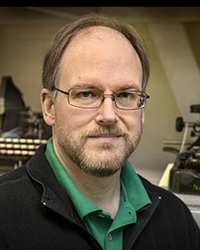 A 25 year veteran of the museum field, Ron holds a bachelors degree with dual majors in History and English (Museum Studies concentration) from CMU, in addition to graduate work in History. Ron worked briefly for the Center for Cultural and Natural History (as the museum was then known) before accepting a position as Curator of Collections and Research with the Bay County Historical Society/Museum (BCHS) in Bay City, Michigan. After 13 years in this position, Ron was promoted to the senior leadership position of Director of Operations and Chief Historian. During his time with BCHS he was part of a team that administered major transformations to the museum's physical plant, exhibit galleries, and collections. Ron cultivated and managed a collection that numbered approximately 250,000 historical objects and archives centering on the history of the Bay County region including large collections related to Great Lakes maritime and local history, genealogy, and many other topics. During this time the society received three major awards in acknowledgement of their efforts: the Award of Excellence from the American Association for State and Local History (2001), Michigan Museums Association Award of Excellence (2006), and Preserve America designation (City of Bay City received this recognition in 2007 due in large part to BCHS's efforts).

Ron has widely researched and lectured on local history, shipwreck preservation, historic resource management, historic preservation, and collections care. He​ has authored three books that show how local historical resources (particularly photographs) can be used to convey local history. Lost Bay City (2015), Legendary Locals of Bay City (2012), and Maritime Bay County (2009) were all published under the Arcadia Publishing imprint. In addition, he co-authored three books that include Through the Lens (2008), Recipe for a Community (2001), and Bay City Logbook (1996); and was publisher and editor of several other works, including the award-winning Historical Architecture of Bay City, Michigan.  Ron's work has also appeared in Michigan History Magazine, Michigan Historical Review, and numerous Bay County Historical Society publications. ​

Ron's significant leadership experience in history, historic preservation, historic resources, and non-profit management includes work in the preservation of Great Lakes underwater resources, museums, and heritage. A certified SCUBA diver since 2001, Ron has avocational experience in underwater archaeology, shipwreck documentation, and the preservation and promotion of Michigan's underwater cultural resources. He is a past president and current board member of the  Michigan Underwater Preserve Council, a Governor-appointed member of the Michigan Underwater Salvage and Preserve advisory committee; was the executive producer/project manager of Sunken Treasure: Preserving Michigan's Shipwrecks, a 2012 grant-funded video documentary promoting proper stewardship of Michigan's shipwrecks; and has worked on many other Great Lakes shipwreck and preservation related projects. His current major project involves a partnership with the State of Michigan to permit, fund, and deploy a series of proper mooring systems for over 150 of the shipwreck sites located with the boundaries of Michigan's 13 underwater preserves.

Ron is a past president of the Michigan Museums Association and current board member; a member of the Michigan Heritage Leadership Council, a state-level advisory committee of the DNR that focuses on the "intersect between the Public, Michigan Heritage, and Outdoor Recreation"; current president of the Association for Great Lakes Maritime History a past board member of the Friends of the Bay City State Recreation Area; a graduate and frequent contributor to the Leadership Bay County program; a past president of the Rotary Club of Bay City; and past chair (and founding member) of alacARTe, a Bay City arts and culture collaboration. He has also participated as a Michigan History Day competition judge for eleven years.