Skip to main content
View All
Will Anderson can be contacted at: 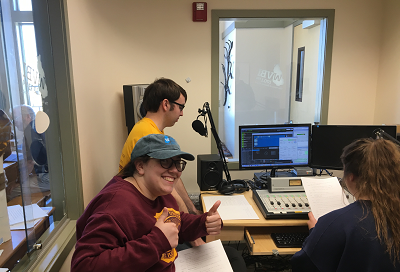 CMU School of Broadcast and Cinematic Arts professor Dr. Will Anderson uses his passion for audio drama to create transformational experiences for students. One of his students, Sam Anker, created an action-packed audio drama that was selected for inclusion in the National Audio Theatre’s HEAR Now festival. At this festival, Anker earned bronze status recognition! Even more excitingly, Anker’s project, “Mia Betts: That’s the Ticket,” was one of the few audio dramas in the festival that was recorded live on the air. Live performances were common during the “Golden Age” of radio drama in the 1940s and 50s but are rare today.  Dr. Anderson explains how the chaotic nature of live production really adds to the overall excitement saying, “It could crash and burn at any time, and people get that energy.”

Dr. Anderson’s passion for writing audio dramas started at a young age. Growing up with limited television, the radio was his main source of entertainment. Dr. Anderson believes audio dramas, like black and white photos, are a hidden gem. He explains how audio dramas’ ease of production piqued his interest, “you don’t need cameras, you don’t need sets... you don’t even need your actors to memorize their lines.”.  In addition to creating works that allow student involvement, Dr. Anderson experiments with ways to increase audience exposure to audio dramas beyond traditional radio broadcasts.

Dr. Anderson recently produced a series of historical audio dramas that can be found around CMU landmark buildings on campus, including Warriner and Moore Halls and the Student Activity Center. QR codes throughout the buildings allow people to use their phones to link to an audio drama about CMU during the year that the building was constructed. With each project, Dr. Anderson continues to explore the medium and help students expand their own passion for audio and drama, just like Sam Anker.