Skip to main content
View All
Dr. Schisa can be contacted at:
schis1j@cmich.edu

Power of the Protein 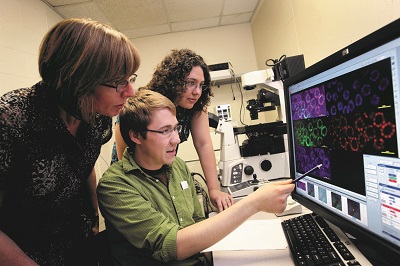 Dr. Schisa and her students are working on understanding how changes in RNA and protein properties contribute to different human diseases, such as dementia, ALS, and Fragile X Associated Primary Ovarian Insufficiency (a fertility issue). Many proteins transition back and forth between being very liquid-like to condensing into granules, and diseases can occur when the phase transitions of the proteins don’t happen properly.  Dr. Schisa and her students are looking at phase transitions in a roundworm, called C. elegans, which is a commonly used model system for biomedical research. Using the roundworm offers many advantages to researchers such as molecular and genetic tools, and many cellular processes are similar between roundworms and humans.

Dr. Schisa and her team of students recently identified a regulator of phase transitions called the CCT Chaperonin which functions to fold target proteins properly.  Proteins must be folded properly in order to work optimally. In the absence of fully functional CCT chaperonin, a subset of proteins condense into abnormally large granules in eggs. The researchers speculate that when proteins condense into extra-large granules the proteins can’t function well, and this may contribute to fertility problems.

Dr. Schisa has been conducting research on the topics of fertility and the development of eggs for 19 years at CMU.  The lab was recently awarded a three-year grant from the National Institutes of Health.  This is the fourth grant Dr. Schisa has been awarded from the NIH.