The President's Award for Outstanding Research and Creative Activity recognizes the achievements of senior faculty members. To qualify for the award, one must be a current tenured faculty member. The award selection committee considers the nominee's research and creative activities throughout their careers, with a special emphasis on accomplishments while at CMU.

Dr. Will Anderson, a Broadcast and Cinematic Arts professor, has received the Central Michigan University 2022 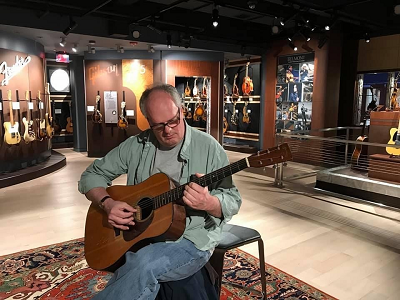 President’s Award for Outstanding Research and Creative Activity. This award can only be received once in a professor’s career and is one of the most prestigious awards CMU has to offer. “It represents recognition and adjudication of a lifetime of work,” said Dr. Anderson, who had studied audio dramas and electronic promotion for about 25 years.

Throughout his career, Dr. Anderson has strived to find new uses and distribution tactics for audio dramas. Now able to go beyond writing scripts, he has opportunities to produce audio dramas in their entirety and find new uses for this form of media. In the past, Dr. Anderson has used audio dramas to document history, tell children’s stories, and worked with students to tell the history of Beaver Island. He has also produced School Spirits, an audio drama that uses QR codes in some of CMU’s most famous buildings to allow listeners to access the audio drama on their phones, and Sixty Six Trips to Lansing, a comedic audio drama that was featured on multiple broadcast stations across the United States and Canada.
Dr. Anderson attributes much of his success to the collaborative nature of audio dramas, stating that the President’s award is “more representative of everyone who has helped me along.” Audio dramas have given Dr. Anderson the opportunity to work with a variety of students and faculty, including CMU President Davies. Dr. Anderson also appreciates the accessible nature of audio dramas, which unlike other forms of mass media, have a relatively low production cost and few limitations to get started in the field.

Over the past year, Dr. Anderson has worked on a book about two things he loves, writing and guitar, which he hopes to promote on a book tour in summer 2023. Dr. Anderson also hopes to continue working to find new uses and distribution avenues for audio dramas. 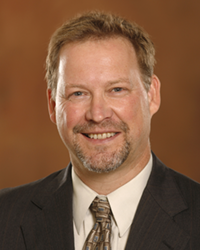 Dr. Thomas Gehring, a professor in the biology department, received the Central Michigan University 2022 President’s award. This award aims to recognize the success of senior faculty members and can only be received once in a professor’s career. “It’s the highest honor CMU bestows to researchers here on campus,” said Dr. Gehring.

Dr. Gehring is a wildlife and conservation biologist whose research focuses on human-wildlife conflicts and finding ways to resolve these issues in a peaceful manner. One of his major areas of study is the interaction between gray wolves and livestock, with the goal of finding ways to protect livestock from the gray wolves in a nonlethal way. Some methods they tested consisted of shock collars, fladry, which is the hanging of flags on a rope around the perimeter of the pasture to create a visual barrier that wolves won’t cross, and livestock guard dogs. Working with the guard dogs was Dr. Gehring’s favorite approach. “The guard dogs led to areas of biology and sociology and economics that I had never thought about,” said Dr. Gehring, “Allowing farmers to be more content in life because they’re not stressed about wolves was so rewarding.”

Besides over 10 years of research on gray wolves, Dr. Gehring has also done research on the Great Lakes and coastal wetland conservation. Going onto year 12 of coastal wetland research, Dr. Gehring focuses on frogs, toads, birds, and muskrats, working with graduate and undergraduate students to look at coastal changes and what could be causing them.
Beyond his research, Dr. Gehring credits the people he’s worked with as his biggest accomplishment. “Working with undergraduate and graduate students and helping mentor them, seeing them do awesome stuff in their professional and personal lives. That’s bigger than anything,” said Dr. Gehring.

Going forward, Dr. Gehring plans to continue his coastal wetland research, looking into long term patterns and changes in wildlife and water levels. He hopes that this research will help to inform policy and provide better insight on the environment around the Great Lakes. Dr. Gehring will also become more involved with gray wolf issues again and plans to begin experimentation with livestock guard dogs again on a much bigger and international scale.