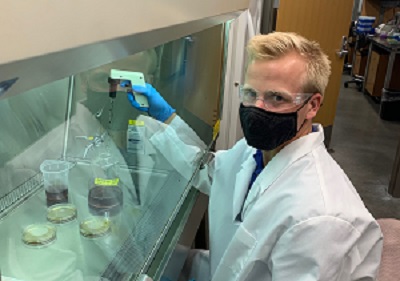 Dr. Cynthia Damer, in the Department of Biology, was awarded a competitive grant of $424,000 by the National Institutes of General Medical Sciences. Using this grant, Dr. Damer will spend three years studying the function of copine proteins, a group of proteins that can be found in most organisms, ranging from simple single-celled organisms to multicellular animals, such as humans. Though their exact function is unknown, their presence in most organisms leads researchers to believe they play an important role fundamental to life. Dr. Damer will use this grant to further her studies on copine proteins and provide clarity on their exact functions.

Dr. Damer and her team of graduate and undergraduate students, study copine proteins using Dictyostelium discoideum, single-celled organism that feeds on bacteria found in soil. However, when starved, Dictyostelium cells will come together to form multicellular reproductive structures, allowing the team to study the function of copines in basic cellular processes and development. Using Dictyostelium, grown in Petri dishes, the research team will conduct various experiments, such as removing the genes that code for the copine proteins to see what cellular functions are lost, in The National Institutes of General Medical Sciences grant money will go towards funding supplies and equipment in Dr. Damer’s lab, such as a new stereomicroscope and camera to image Dictyostelium development.  While the exact function of copines is unknown, they occur in high concentrations in human cancer cells. When the amount of copines is reduced, the cancerous properties of a cell are also reduced. If Dr. Damer and her students are successful in determining copine functions, their research may provide valuable insight that can aid in future cancer cell research.