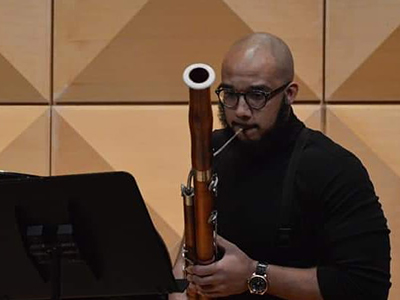 He was offered a full scholarship to play football at CMU in 2015.  He took the scholarship and played for three years as a Chippewa linebacker while majoring in biomedical sciences. After those three years of playing football, his interests changed, and he wanted to pursue another path.  Carlos contacted his old band director from high school Nicholas Taylor who told Carlos that he should audition at the School of Music.

Carlos auditioned for the Bassoon, and MaryBeth Minnis Professor at the CMU School of Music liked what she was hearing. Since that audition, Carlos is now a music performance major working directly with Professor MaryBeth Minnis and Dr. Lindabeth Binkley the oboe professor.