Broadcast and Cinematic Arts professor Dr. Will Anderson has received an award from the Broadcast Education Association's Festival of Media Arts for his work School Spirits. This festival works to highlight the work of both faculty and students from over 250 colleges, of which Dr. Anderson's School Spirits was awarded Best in Competition for Mixed Interactive Multimedia Storytelling.

School Spirits is an audio drama focusing on the history of CMU's buildings, using QR codes to create an interactive experience that sheds light on the changes Central has undergone over the years. A work six years in the making, School Spirits utilizes the audio drama medium to allow visitors around campus to listen in on the history Central Michigan University's buildings. Featuring the voices of various CMU employees, including President Bob Davies, Dr. Anderson worked with over a dozen students, staff, and alumni on this award-winning interactive audio drama. 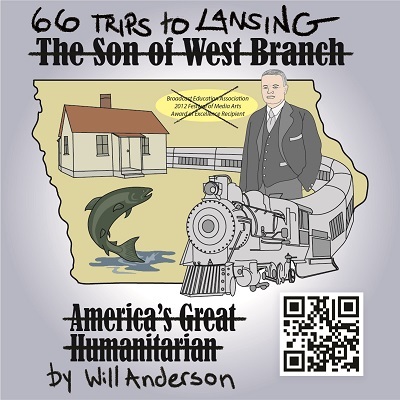 Dr. Anderson was also awarded a Silver award by the HEAR Now Festival hosted by the National Audio Theater Festivals for both School Spirits and his newest work Sixty Six Trips to Lansing. The National Audio Theaters Festivals is the largest organization for audio drama producers ad talent, and Dr. Anderson attests his success this year as a "testament to the quality and efforts of he many people at CMU who helped."

Sixty Six Trips to Lansing, Dr. Anderson's newer piece, is a comedic audio drama in which a grant applicant attempts to justify his application by describing his rock musical focusing on Herbert Hoover. Featuring CMU professors Jeffery Weinstock and Ted Clayton, Sixty Six Trips to Lansing was written and produced during the lockdown of 2020. Each voice actor recorded their lines from their homes, and the finished recordings were edited together by BCA graduate student Lucas Nunn. Besides winning a Silver award at the HEAR Now Festival, it has also been featured on multiple radio and broadcast stations around the United States and Canada.

Dr. Anderson has been writing audio dramas for the past twenty-five years and uses his research at Central Michigan University to develop new ways or audio dramas to shine. He credits the internet, as well as the rise in popularity of scripted podcasts, such as Serial or Welcome to Night Vale, as major factors in growing rediscovery of audio dramas in the public eye.