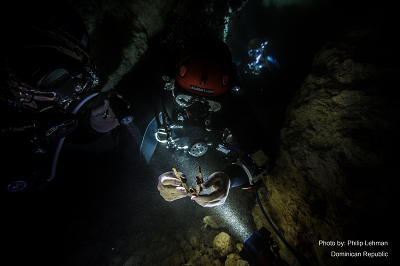 Central Michigan University anatomy professor Dr. Zachary Klukkert researches the functions of anatomical differences among primates to understand how they have evolved to interact with their environments. He also studies features in living species that can help us understand those that have gone extinct. Dr. Klukkert is especially interested in the primates from the Caribbean and Madagascar. Some species were not well known; however, because there were only a few bone fragments of some primates from these regions, particularly from the Caribbean. Then, in the last ten years, underwater cave sites were discovered with wonderfully preserved bones spread out across the floors of the flooded passages. Dr. Klukkert is one of the only cave-diving paleontologists (the study of fossils), and as more water-flooded cave sites are found, his unique work has taken him around the world.

His field research has been featured in Forbes and Outside online edition magazines and he appeared in the 2019 PBS film “When Whales Walked.” Paleontology and extinction are often thought of as ancient events with unimaginable creatures that can only be viewed in museums, but the animals that Dr. Klukkert studies are different. His research carries a sense of urgency and relevance. Many of the animals whose bones he brings up from the caves are extinct today as a result of human activities. His work sends a practical message by showcasing these recent extinctions and he hopes that his research encourages action, not despair – “We can ignore the changes and find ourselves surprised one day when something we’d cherished is gone, or, inspired by the power of our species and excited by the richness of the natural world, we can look for a way to compensate or correct the transformations underway.”

Dr. Klukkert’s fieldwork in Madagascar was spotlighted by the National Science Foundation on National Fossil Day on October 14. Dr. Klukkert and his team were thrilled to share their exciting stories and photographs with the NSF, and the public, to display the cutting-edge research underway with the support of the NSF, and to bring awareness to the changes that are happening in this wonderful and fragile world of ours.