Skip to main content
View All
Giving The Devil His Due: Satan and Cinema 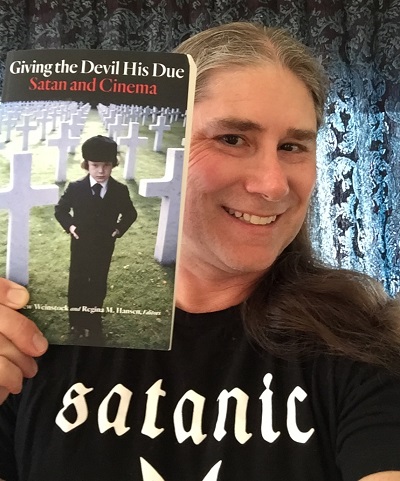 Dr. Weinstock and his co-editor began working on this project back in 2015 to “fill a surprising gap in existing scholarship.” Giving The Devil His Due: Satan and Cinema examines the history and significance of Satan’s on-screen representation, dating back to the 1890s. The book explains that by reflecting moviegoers’ concepts of good and evil, the cinematic devil reveals audiences’ own culturally specific anxieties and desires, a topic that has interested Dr. Weinstock since he first began studying the Gothic.

Aside from working on Giving The Devil His Due: Satan and Cinema, Dr. Weinstock keeps busy with other research projects and expects his newest book, Popular Culture For Beginners, to be available for purchase this October. Dr. Weinstock is also in the process of writing four other books, which will focus on the writing of contemporary fantasy author Neil Gaiman, American ghost stories, the Gothic elements found in the work of author Herman Melville, and the Gothic elements found in Disney.

Dr. Weinstock explains the difficulty of balancing his research with teaching, sharing that “The hardest part is not being able to establish a rhythm for writing during the semester because other obligations, such as class preparations and grading, must take precedence. That's why I ‘put the pedal to the metal’ over the summer and try to get as much writing done as I can.” While it can be difficult at times, Dr. Weinstock’s passion for the Gothic makes it all worthwhile.

Giving the Devil His Due: Satan and Cinema joins Dr. Weinstock's other book publications. These include The Monster Theory Reader (which is currently a finalist for a World Fantasy Award), The Cambridge Companion to the American Gothic, The Age of Lovecraft, The Vampire Film: Undead Cinema, The Works of Tim Burton: Margins to Mainstream, The Rocky Horror Picture Show, and his first textbook, The Mad Scientist's Guide to Composition.