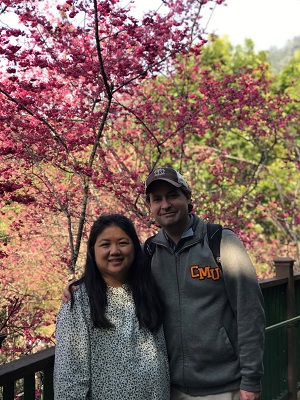 Spouses and History professors Lane Demas and Jennifer Liu return from a life-changing opportunity teaching and researching in Taiwan with Fulbright Scholar Awards. The Fulbright Award is part of an international exchange program sponsored by the U.S. government, designed to connect people from around the world through education. Dr. Demas and Dr. Liu were two of three CMU faculty members honored with this prestigious award in 2020! These awards allowed Dr. Demas and Dr. Liu to move their family of four to Taiwan for the spring of 2021.

During their time abroad, Dr. Demas and Dr. Liu were able to deep-dive into their specialized areas of study. Dr. Demas taught African American history at Taipei's National Chengchi University (NCCU), one of Taiwan’s top schools for humanities. There he was reminded of the shared humanity that binds the world together, sharing, “It amazes me to think how much CMU and NCCU students have in common.” Similar to CMU, the NCCU students were nervous about their grades, unsure of their career paths, lacking proper sleep, etc. However, Dr. Demas was most intrigued by the students’ shared interest in Black culture, the anti-racism movement, current-day discrimination, etc. This is why programs like study abroad are so important⁠, Dr. Demas explains. They bring people together by highlighting their similarities.

Similarly, Dr. Liu applied her knowledge of China’s twentieth-century history to the Center for Chinese Studies at the National Central Library, Taiwan’s equivalent to the Library of Congress in America. Here she researched the evolution of women’s magazines from the 1970s and examined their influence on the construction of the “modern” woman and fashion consumption in Taiwan. Over time, women’s magazines adapted to better suit their audience’s changing interests. In the 1970s, Taiwanese women’s magazines assumed their readers were domestic, home-bound, family-oriented women; the content of these magazines reflected this. However, by the 1990s, international magazines such as Vogue, Elle, and Harper’s Bazaar, had gained popularity in Taiwan and represented a more modern woman whose desires of work and romance reached beyond the traditional expectations of domesticity. The “imagined” readers of the 1990s were assumed to be affluent, single, metropolitan women who cared more about beauty and youth.

While Dr. Demas and Dr. Liu identified many similarities between Taiwan and America, they were confronted with the most obvious difference: language. Though Dr. Demas’s NCCU history course was taught in English, it was still difficult at times to communicate. For the majority of his students, English was their second language. Dr. Liu, however, was more familiar with  Mandarin Chinese as her parents had emigrated from Taiwan and she grew up speaking and reading it.

Another difference Dr. Demas and Dr. Liu observed was how Taiwan operated during the COVID-19 pandemic. When they arrived in January 2021, they were put into a strict quarantine. As a result of these precautions, there were no new cases in the country at the time, and the Liu-Demas family got to experience a relatively normal few months with most events being in person (such as teaching, researching, and the Fulbright banquet). The trip also took place during the U.S. presidential inauguration. Dr. Demas shares, “It was a unique experience trying to dialogue with Taiwanese and offer historical perspective while watching 2021 US events from abroad.”

Upon their return to the U.S. in June, Dr. Demas and Dr. Liu are more committed than ever to advocate for study abroad. They believe that life abroad can have a life-changing effect on students, researchers, and professors alike.