Skip to main content
View All
Dr. Jacob Aday can be contacted at adayjacob3@gmail.com

Dr. Christopher Davoli can be contacted at davol1cc@cmich.edu

Dr. Emily Bloesch can be contacted at bloes1ek@cmich.edu

Dr. Jacob Aday, a recent graduate of CMU’s Experimental Psychology Ph.D. program, now contributes to the growing field of psychedelic science as a postdoctoral researcher at the University of California, San Francisco (UCSF). Psychedelic science explores the effects of hallucinogenic substances, such as magic mushrooms and LSD, which can ​​cause short-term and long-term changes in perception, mood, and cognitive processes.

“I originally went to CMU to conduct perception and attention research,” Dr. Aday admits. Everything changed when he was introduced to the possibilities of psychedelic science while in his first-semester History of Psychology course. “My interest grew from there,” he explains. Dr. Aday went on to publish 10 peer-reviewed articles on psychedelics and present at the largest psychedelics conference in Europe. During his time at Central, he also established international collaboration with a retreat center in Costa Rica as part of his dissertation.

“I had always been interested in psychedelics, it just didn’t seem like a legitimate career path, at the time… There were very few schools doing psychedelic studies." Dr. Aday thanks his Ph.D. advisors Drs. Christopher Davoli and Emily Bloesch for the constant support and encouragement. “They were very open-minded and helped me follow my research interests… I was very lucky to have worked with them.” Dr. Aday concludes. 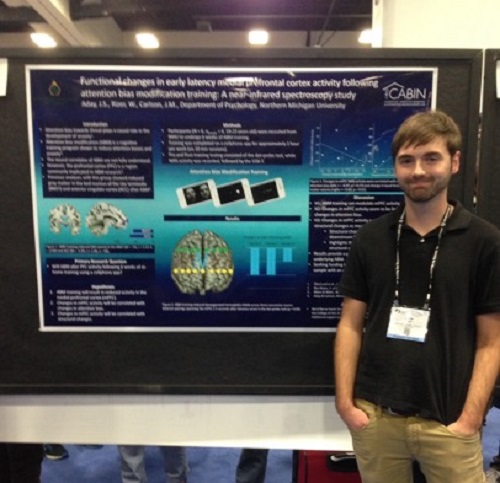 Today, Dr. Aday is at UCSF for his postdoctoral fellowship studying psilocybin, a psychedelic compound found in over 200 fungi species. These fungi are commonly known as magic mushrooms. Dr. Aday is preparing to conduct a 4-month trial comparing the different routes of administering psilocybin and psilocin tablets. Psilocin results from the digestion of psilocybin. “Psilocin is actually what travels through the bloodstream and ends up attaching to the serotonin receptors in your brain to induce these changes in cognition and emotion.” Thus, there is greater variability in how psilocybin is metabolized and received than psilocin. “Two people that are given the exact same amount of psilocybin will result in different amounts of psilocin,” Dr. Aday explains.

To learn more, Dr. Aday prepares to conduct a study comparing the difference between psilocybin and psilocin. Each of the 20 participants will be administered a psilocybin tablet and asked to swallow it; the psilocybin will then go into the gut and be metabolized. During a different session, participants will be administered psilocin tablets and asked to ingest them sublingually (under the tongue). By ingesting the tablet sublingually, the psilocin will go directly into the bloodstream and avoid digestion altogether. Dr. Aday hopes this will lead to more consistent effects between participants and result in fewer negative effects associated with metabolizing psilocybin, such as nausea.

Curiosity and passion are at the forefront of Dr. Aday’s work. He explains the profound impact the discovery of LSD in the 1940s had on psychologists’ understanding of the mind and how it worked. “The fact that something on the scale of micrograms can change peoples’ cognition and perception and emotions... That's really intriguing to me.” “The utility of using [psychedelics] in a therapeutic context is also something that drives me,” he adds.

Findings from Dr. Aday’s study will contribute to the growing understanding of psychedelic substances and their medicinal potential in treating mood symptoms in disorders such as Parkinson's disease, depression, and anxiety. CMU graduates like Dr. Aday are leading in unprecedented research and making lasting contributions to their fields every day.