Skip to main content
View All
Amber Hubbard can be contacted at hubba3e@cmich.edu 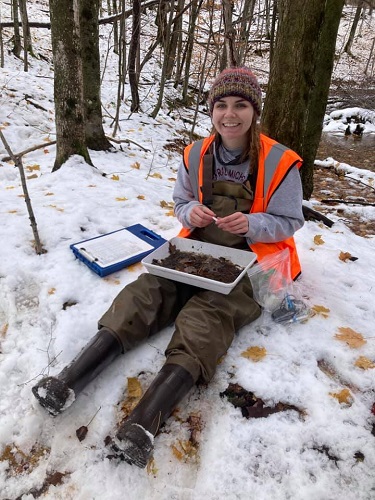 Amber Hubbard, a Master’s student in the Department of Biology, analyzed the impact anthropogenic disturbance has on water quality and invertebrate communities (species without a backbone) in Michigan swamps. Anthropogenic disturbances are human-induced development activities such as forest clearing and the introduction of invasive species; this can have harmful effects on ecosystems and often results in habitat loss and reduced biodiversity.

The relationship between disturbance and changes in the invertebrate communities are well documented among various wetland types. However, little is known about how the anthropogenic changes in invertebrates impacts the overall health of a wetland. Motivated to bridge this gap in understanding, Hubbard conducted her own research analyzing the forested wetlands (swamps) of Michigan’s Northern Lower Peninsula (NLP).

“I chose to look at northern Michigan swamps because they are a relatively understudied and underrated wetland type. I think when most people picture a wetland in their mind they see emergent marshes with cattails, but there are so many other wetland types, such as bogs, fens, wet meadows, marshes in Michigan, all of which are facing similar threats from human disturbance.”

Hubbard and her research team began with a hypothesis. They expected to find that the swamps surrounded by higher levels of disturbance would exhibit lower invertebrate diversity when compared to relatively pristine wetlands. The team collected invertebrate samples from eight swamps across the NLP. Hubbard conducted several tests to determine each wetland’s characteristics including land cover calculations, water chemistry analyses, and plant surveys.

The wetlands were monitored over three seasons in 2021 to examine their seasonal differences.