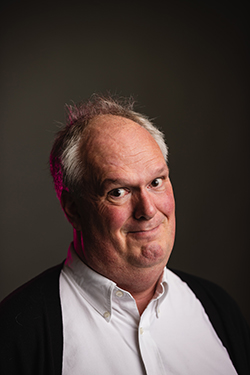 A nationally recognized audio dramatist and winner of the 2022 Central Michigan University President’s Award for Outstanding Research and Creative Activity for his work developing new uses and distribution avenues for audio drama, Will as a teacher has made it his life’s goal to create good writers and rationale-driven strategic communicators. And he has over two decades of student successes as a testament to his efforts.

Prior to arriving at Central in 2002, he taught media writing and television performance for six years at Northern Illinois University, worked as a copywriter at the then-largest school and library supplier in the world, wrote television listings for the promotions department of Wisconsin Public Television, did some freelance radio/TV ad production, and had a short-lived run as a feature writer for Sheep magazine.

Sixty six trips to Lansing Comedy script about pitching a grant for an ill-advised rock musical. Produced as a remote production experiment during the COVID-19 lockdown, actors recorded lines independently using available technology with assembly in post. Project financed by a $400 College of the Arts and Media grant and received a Silver award from the National Audio Theater Festivals in June 2021.
https://www.buzzsprout.com/1764570/9315670?fbclid=IwAR3-ENvxZoGB2S_ndERdsQ7U6Xrh6jD3MIJnirXOkeaUZw3OEE9UiRJv75A

Voices of our grandparents: Dramatization of African American oral history Project director and primary investigator for transforming oral histories into audio drama vignettes. The linked student-written vignette below was sponsored by a $615 Faculty Research and Creative Endeavors grant to conduct a series of interviews over summer 2021 with relatives. The resulting dramatization of his grandfather’s recollections of the 1967 Detroit riots was awarded first place in the college on-air personality/team category April 2022 by the Michigan Association of Broadcasters.
https://www.buzzsprout.com/1764570/9700403?fbclid=IwAR1drKznuyBns0D0FDezxJL_ChzlL_FG0bTmpIzojMAKFPs-MWbrq5_IooA

The son of West Branch: America’s great humanitarian Educational presidential history dramatizing the life and events of Herbert Hoover leading up to his 1928 presidential run.  Written during 2008 Herbert Hoover National Historic Site artist residency. Produced, performed and broadcast before a live audience of 200 by the National Audio Theater Festivals 2011. This production received a Broadcast Education Association Festival of Media Arts Award of Excellence in 2012.
https://www.nps.gov/articles/the-son-of-west-branch.htm